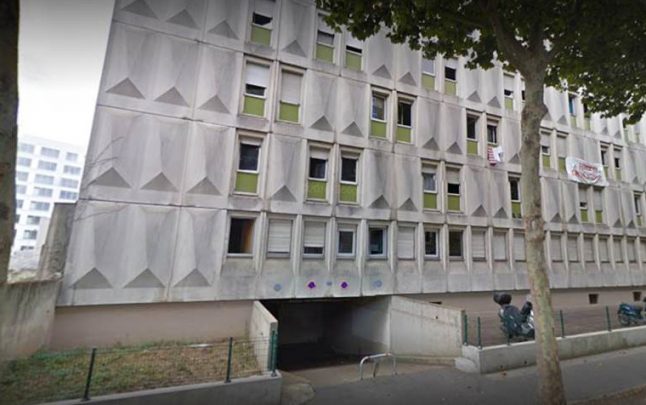 Photo: Google Street View
The fire broke out in the early hours of Friday morning at the centre in Boulogne-Billancourt, in the Hauts-de-Seine department to the south west of Paris.
A spokesman for the residents, Bakary Cissoko, said the victim was a Malian man in his forties, who jumped from the third floor into a courtyard in an attempt to flee the blaze. “He arrived in the shelter about four years ago,” Cissoko said.
Another twelve people were injured, three seriously after jumping from the windows, police said.

Seventy firefighters at the scene managed to extinguish the blaze by 4am.
A police source said the fire, which damaged the entrance area and a storage room but did not spread to the rooms, “appears to be criminal in nature.”
Traces of fuel and lighter fluid were found at the scene.
“One of the injured is suspected of being the arsonist. He is also a resident. So it was very likely an internal settling of scores,” the interior ministry said.

Prime Minister Bernard Cazeneuve tweeted a message of solidarity with the migrants and vowed that all light would be shed on the incident.
The home, which consists of two buildings, is run by the Coallia charity, which specializes in social housing.
On its website Coallia said the home, which also runs training programmes for migrants, has 328 beds.
In the past few months there have been several attacks on migrant shelters in France, mostly targeting centres for asylum seekers relocated from makeshift camps and squats in the northern port of Calais or Paris. But there had been no injuries or fatalities in those attacks.
On Friday, authorities cleared another of the migrant camps that keep sprouting up in or around Paris.
Around 300 migrants – mostly Afghans, Sudanese or Eritreans – had been living in the tented camp in the northern Paris suburb of Saint-Denis.
The settlement was situated a few hundred metres from a new refugee transit centre set up by Paris city authorities to take asylum-seekers off the streets.
The centre only has space for 400 people at a time.
Url copied to clipboard!