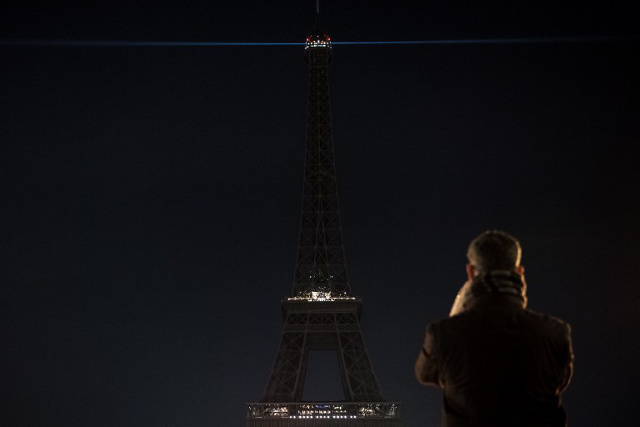 The Eiffel Tower turned out its lights in support for Aleppo on Wednesday.
Ambassador Samantha Power told reporters following a closed-door council meeting that UN officials already based in Syria were ready to be quickly dispatched to the city as a “presence for protection.”
“They are eager and willing to carry out monitoring,” Power said.
“The presence of independent observers can deter some of the worst horrors.”
France told the council meeting that it was working to quickly present a draft resolution on its proposal, but Russia, Syria's main ally, expressed skepticism.
“There are some elements which I thought were questionable,” said Russian Ambassador Vitaly Churkin, arguing that it would take weeks to send themonitors to Aleppo.
“To imagine that you can do it within two or three days is really unrealistic,” he said.
Power said: “I think we are hoping to vote over the weekend, at least, because of the extreme urgency.”
The ambassador sought to address Russian resistance to the proposal.
“Russia has helped deliver Aleppo to the Syrian government. Surely Russia can secure actual safe corridors for civilians,” she said.
“The immediate priority is to save lives, to stop the massacres and to avoid a new Srebrenica,” French Ambassador Francois Delattre said, referring to the massacre of Bosnian Muslims at the hands of Bosnian Serbs during the Balkan wars.
The call to dispatch international monitors came as the Syrian government suspended the evacuation of civilians and fighters from Aleppo, leaving thousands of people trapped and facing an uncertain fate.
The opposition accused the government of suspending the operation in a bid to secure the evacuation of residents from two villages under rebel siege.
It is unclear how many people remain in eastern Aleppo, with tens of thousands fleeing to territory held by the government or Kurds in recent days but perhaps tens of thousands still inside.
UN Secretary-General Ban Ki-moon urged Syrian parties to resume the evacuation operation and allow civilians to leave safely.
“Aleppo is now a synonym for hell,” Ban said in his final news conference before he steps down as UN chief on December 31.
Under a deal reached with Syria and backed by Russia and Turkey, evacuations began from the last remaining pocket of rebel opposition in Aleppo on Thursday, but were halted in the early hours on Friday.
Thousands of people were allowed to leave the city, including 194 patients who were taken to hospitals in Idlib, western Aleppo province and Turkey for treatment, said Ban.
The Syrian government has for months refused to allow UN aid convoys to reach Aleppo as forces loyal to President Bashar al-Assad pushed ahead with an offensive to crush opposition fighters who held the city's east since 2012.
The fall of Aleppo will hand Assad his biggest victory in the nearly six-year war, that has killed more than 300,000 and displaced half of the country's population.