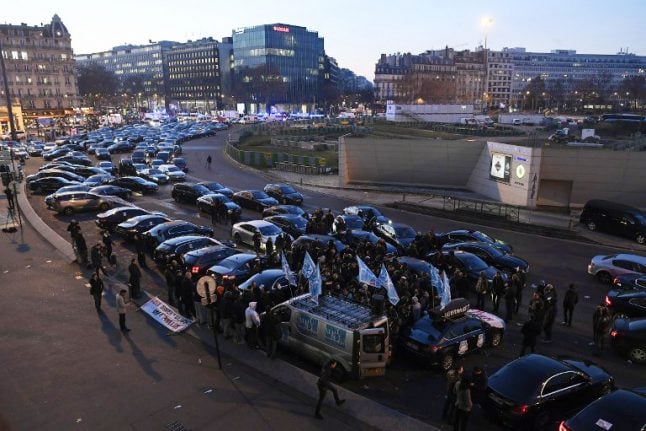 Photo: AFP
Mini-cab drivers, known in French as VTCs (Vehicle de Tourisme avec Chauffeur), were protesting at Orly and CDG airports on Thursday morning.
At 10.10am the airports said that traffic was almost back to normal.

Earlier, the protests caused such long tailbacks at Orly airport that some passengers left their vehicles and finished the journey on foot, social media users said (see below). Others reported missing their flights due to the delays.

Traffic was also at a standstill on the way to Charles de Gaulle to the north of the city, with social media users saying VTC drivers had blocked the entry.

Traffic was diverted at Porte Maillot on the western edge of Paris, where around 150 mini cabs were parked. Police warned motorists that traffic was slow in the area.
Motorists in the area took to social media to warn others to find different routes.

The cab drivers are gathering to protest their wages. Mini cab group SCP-VTC said its members were only earning €3.75 an hour.
“Last week I worked for 83 hours for €1,200. It's slavery,” one Uber driver told Europe 1.
Protesters held signs reading “Uber scam” and “Uber social scam” and “Uber = Modern slavery”.
Some of the drivers came from as far as Lyon, Lille, Nantes, and Strasbourg, reported Le Figaro newspaper.
Similar protests are planned for Nice and Toulouse, the paper added. A coffin with an inscription which translates as “Uber scam”. Photo: AFP