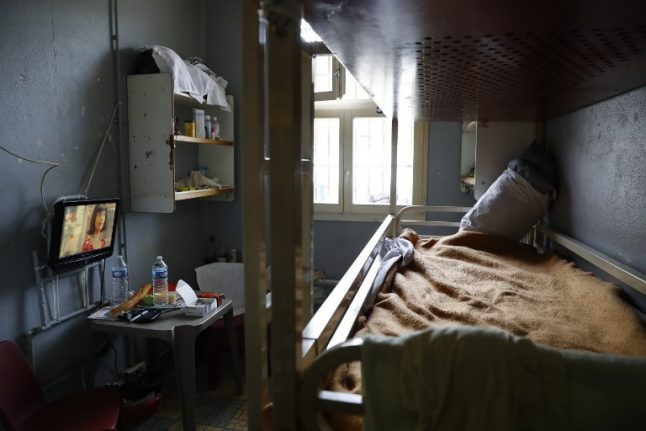 File photo taken on September 20th 2016 shows a cell in the prison of Fresnes, near Paris. Photo: AFP

An inspection by the watchdog, an independent public body, found that the Fresnes prison, 15 kilometres south of Paris, was filled to twice its capacity.

Inspectors noted that hundreds of the jail’s ten-square-metre cells, designed for one person, were instead occupied by three inmates.

Understaffing and overcrowding, coupled with “disastrous hygiene” conditions, contravened European Court of Human Rights criteria and endangered the health of prisoners and guards, the report said. In its recommendations to the justice ministry, the watchdog said the abysmal conditions at the Fresnes prison were in urgent need of redress.

The inspectors’ findings came two months after campaigners filed a complaint against the French state, denouncing the overcrowding and filthy conditions in the prison.

The French-based International Prisons Observatory (OIP) backed its complaint with statements from inmates at Fresnes prison. The OIP has previously warned about overcrowding in French prisons, where the number of inmates soared this summer to 68,819 people for 58,507 places.

The government has also announced a major building programme to tackle the overcrowding problem.

The OIP said conditions were particularly bad at Fresnes, where 2,800 inmates are crammed into a jail with a capacity of only 1,607.