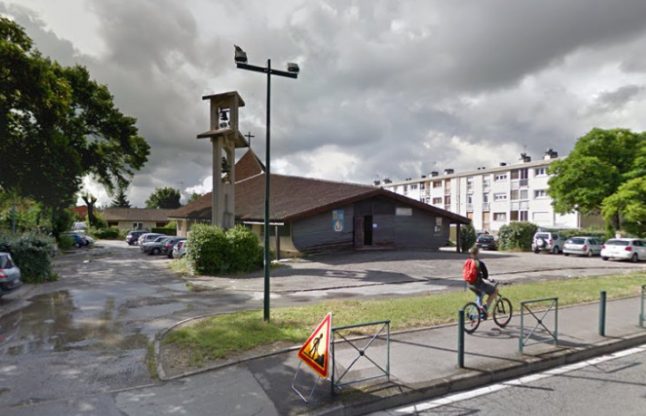 Photo: Google Street View
The device was found outside the Saint-André church in the suburb of Roseraie, to the north-east of the city (see map below) last week.
But the story, which is only emerging in many French newspapers on Thursday, is causing many furrowed brows, especially with France in the middle of a state of emergency.
The bomb was found by a church goer last Thursday inside a small cardboard box against the church's door.
Inside were two bottles of lighter fluid connected by electrical wires, several French media outlets reported.
Officers were called to the scene, and for some reason decided to take the device back to the police headquarters, reported La Depeche newpsaper.
The police station was then promptly evacuated and the bomb squad was called in.
A police source told L'Express newspaper that the device was “capable of a small explosion”. It also remains unknown who was behind the placement of the apparent bomb, and what their motives may have been.

The local police launched an investigation, but are yet to reveal any fruits of their labour.

A spokesperson for the church said that they were “waiting for developments before commenting”.
Local authorities, without referring to the case, told all religious heads in the area not to hesitate in checking the bags of those entering places of worship.

The city of Toulouse has a horrific relationship with religion-related attacks, with jihadist Mohamed Merah killing seven people, including a rabbi and three Jewish children, in 2012.

In July this year, an elderly priest was killed by two knifemen in a church in northern France. The men claimed to be from Isis.