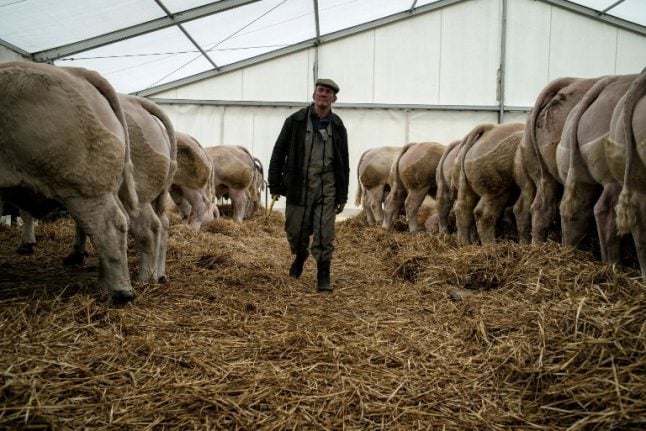 Photo: AFP
France's presidential election is generating little enthusiasm on the windswept plains of Normandy, where struggling farmers long ago fell out of love with the establishment, whether in Paris or Brussels.
“Every five years when elections come around they put farmers on a pedestal, and then once they're in power they leave us by the wayside,” said Jean-Francois Leostic, a dairy farmer near the town of Bayeux.
Farmers in the cradle of Camembert cheese and Calvados apple brandy hold out little hope that the president elected in May will have their back.
In Europe's top agricultural power, the government admits that more than a tenth of France's 400,000 farms are in a “situation of extreme urgency”.
The crisis has torn at the fabric of rural life, and as farmers see their livelihoods evaporate, more and more are giving up, with an alarming spike in suicides over recent years.
A helpline for farmers recorded 1,700 calls in the first half of 2016, nearly triple the number from the same period in 2015.
Last month, farmers in Orleans set up a symbolic cemetery of wooden crosses outside the central city's cathedral to dramatise the surge. Suicide vigilance
Last year saw months of protests nationwide, and hundreds of Normandy farmers made headlines by driving their tractors to the regional capital Caen to dump manure outside government offices.
Philippe Marie, who raises dairy cows and grows apples on a 400-year-old, 100-hectare (250-acre) farm near Bayeux, was among them.
“I join all the demos,” Marie told AFP. “It's important to show… that we are still here, still proud and we still want to succeed.”
But Marie, 49, says the anger has given way to despair: “Many of us… no longer dare to talk about it.”
Anne Pelletier, who counsels distressed farmers, says she is on the lookout for the most severe cases.
“We are vigilant,” she said. “We are trained in suicide prevention but that is not a guarantee.”
Agri-business accounts for a ballooning share of France's farm income — €75.2 billion ($80 billion) in 2015.
Last year, 30 percent of French farmers earned under 354 euros a month — far below the national poverty threshold of 800 euros — and their numbers are rising fast, according to the farmers' social security system.
Farmers predominated in the countryside in the 1970s, but they now make up just two percent of France's overall population of 66 million, said political scientist Jean-Yves Camus.
Some 5,000 people leave agriculture each year.
“Young people are getting out of farming. It's understandable,” said Daniel Lecuir, who heads a dairy producers association representing nearly 180 farms.
The farmers' worsening plight has boosted the sway of the far-right, anti-EU National Front (FN) led by Marine Le Pen.
“The FN has gotten stronger with (Socialist President) Francois Hollande in power,” said Franck Lechevrel, who runs a bar in Bayeux. “I know quite a few guys who say they're voting Le Pen.”
Jean-Francois Godard, whose dairy farm is going organic for the extra cash its milk will fetch, understands the temptation.
“Europe has become a scapegoat,” he said. “The National Front proposes… to leave the EU, to leave the euro. People say to themselves they won't have any more hassles, that could entice some farmers.”
Xavier Beuline, head of the main farmers' union FNSEA, said on Tuesday that presidential candidates should show “more consideration” for farmers or “not be surprised” to see them turn away from traditional parties.
Camus acknowledged that the FN is on the rise in rural France, but for farmers, any anti-EU sentiment must be weighed against the EU subsidies that make up some 80 percent of their income, on average.
Without this aid, “their situation would be really drastic”, Camus noted.
'Grievances'
Dairy farmers' incomes have plunged since milk quotas were ended last year, leading to a steep drop in prices.
Globalisation — an insignificant factor when the EU's Common Agricultural Policy (CAP) was first set up in 1962 — has further depressed prices.
Small dairy farmers' cut of a litre of milk at the supermarket fails to even cover their overheads while retailers enjoy huge margins, so “naturally they have grievances”, Camus said.
But the French farm, along with France's vaunted cuisine, is so embedded in the national psyche that no one can imagine its total disappearance.
“We have a real card to play” as the producers of food specialities prized around the world, said Lecuir. “They can never take that away from us.”
By the AFP's Gina Doggett