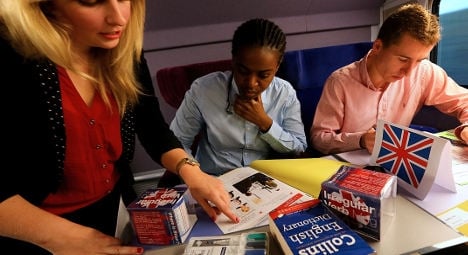 English remains in demand on the French job market. Over the past 12 months, 14 percent of job ads published required applicants to speak English “correctly”. In the marketing sector, 26 percent of jobs included this stipulation, according to a study by Joblift, a jobs search engine.

The number of jobs open to non-Francophones rose by 8 percent over the year. Sales and account management positions accounted for the lion's share of these jobs. These were very much in the minority, though: only around 1,000 positions out of more than a million did not require knowledge of French.

German was the most sought-after language by recruiters, after French and English. German was twice as popular among companies as Spanish, and ten times more sought-after than Chinese.

The figures indicate that French school pupils may be making poor choices: only 15 percent currently choose German as their second foreign language, against 34 percent who choose Spanish. French trade with Germany was worth €170 billion in 2015, against €63 billion for trade with Spain. 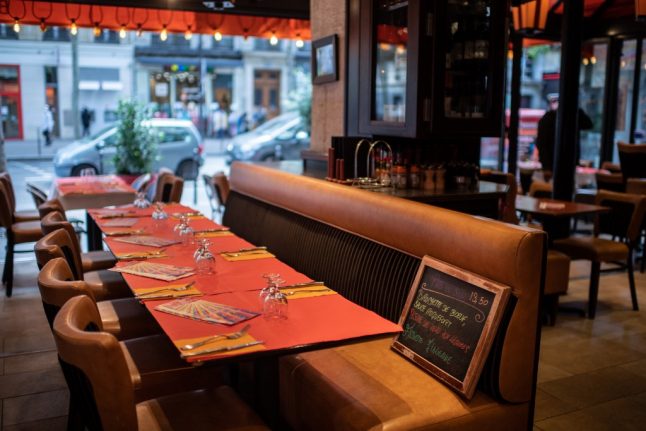 Customers are allowed to sit inside Paris cafés for the first time since March 14th. Photo: AFP

The sooner-than-expected reopening for the Paris region was announced by President Emmanuel Macron on Sunday, followed by news of nine Covid-19 deaths in the previous 24 hours – France's lowest daily toll since March.

While restaurants across most of France were allowed to open earlier this month, those in and around the capital, where Covid-19 circulation remained high, could serve clients only on outdoor terraces. Physical distancing rules mean that not all tables can be used. Photo: AFP

“The question now is whether clients will come back,” Albert Aidan, the manager at L'Ami Georges, a few blocks from the Opera Garnier, told AFP.

“Most companies are still having their employees work from home,” he said.

Not all restaurants immediately threw open their doors – the Vaudeville, a classic brasserie down the street, remained closed.

Yet many shared Macron's optimism that France has marked a “first victory” against the coronavirus thanks to strict stay-at-home orders imposed in March.

“The bulk of the epidemic is behind us,” Health Minister Olivier Veran said on Monday, though he cautioned: “This doesn't mean we can stop fighting the virus.”

“It's going to be a party,” Stephane Manigold, owner of four Paris restaurants, including the two-starred Maison Rostang, told AFP. Many people are still working from home, cutting the potential for lunchtime and coffee customers. Photo: AFP

Manigold made headlines last month after successfully suing his insurer, French giant Axa, to pay around €70,000 in compensation for lost business.

Insurers argue that most contracts do not cover the nationwide administrative shutdown but restaurants say their livelihoods are on the line, and have called on the government to intervene.

Even in the rest of France, where restaurants were allowed to fully reopen from May 11th, owners have had to remove tables to ensure a distance of one metre between diners.

Didier Chenet, head of the GNI association of independent hotel and restaurant owners, estimates the social distancing rules have cut capacity by half at least.

Unless the government lifts the one-metre rule, he said, “recovery will be very slow, with economic conditions that are not viable for our businesses,” he said. Staff must wear masks, as do customers when arriving and leaving. Photo: AFP

Foreign tourists, the key ingredient for success at Paris restaurants in particular, are not expected to arrive in pre-Covid numbers anytime soon, even as the EU begins to open up its internal borders.

The first train from Paris to Germany since mid-March left the Gare du Nord station early on Monday, heading for Dortmund.

“We're taking the children to see their grandmother and spend some holiday time together as a family. It feels good after so long!” said one passenger, Alexis.

Many Paris restaurants will need time to restock and get their employees back. The French state has been paying the bulk of their salaries during lockdown to avoid layoffs, a colossal financial effort.

Alain Fontaine, owner of Le Mesturet, and his staff were preparing spaced-out tables amid arrows on the floor showing clients where to walk, ahead of reopening his dining room Tuesday.

Clients will be asked to use sanitising hand gel on entry and keep their masks on until seated, he said.

“We'll have to try to alleviate the nervousness, and also this element of formality,” Fontaine told AFP as masked cooks prepared for the sidewalk lunch crowd.

Manigold, for his part, said: “At best we'll open two restaurants on Wednesday, and the others next week.”

“One day maybe politicians will understand that you can't just open a restaurant in a day. They could have avoided the abruptness,” he added.

Macron said on Sunday that the government had mobilised €500 billion to ease the coronavirus blow to the economy, including more than €6 billion in state-backed loans to restaurants, hotels and cafes.

He also announced all children up to middle school age must return to class next Monday, a relief for parents who have been juggling work and home schooling.