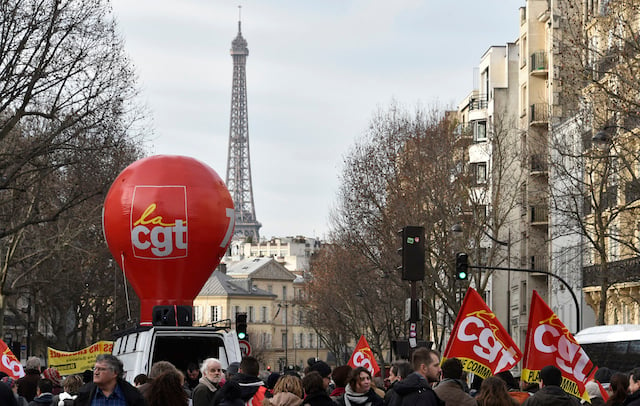 Members of the CGT union in an earlier strike. Photo: Dominique Faget/AFP
Unions representing the 300 workers said they called the strike over the “deliberate absence of transparency” on key decisions relating to the functioning of the tower.
A spokesman for the hard-left CGT union Denis Vavassori said employees were particularly worried about a paint stripping operation planned ahead of a new paint job in 2017.
“The monument is in an obvious state of disrepair,” he said, warning of the “health risks” to staff from what he called a “botched” operation.
The strike left crowds of disappointed visitors who had to make do with admiring the the 324-metre (1,063-foot) tower from the ground.
The tower's operator SETE confirmed the latest closure was caused by a labour dispute.
“Discussions are taking place between management and workers' representatives,” SETE said, adding it regretted the inconvenience to visitors.
The dispute is the third in six months at the venerable “Iron Lady”, with staff having already walked off the job twice in June, during the Euro football championship hosted by France.
Those strikes were in protest over controversial labour reforms pushed through parliament by the Socialist government.
Almost seven million people bought tickets to the Eiffel Tower in 2015, 80 percent of them coming from abroad to clamber up its lattice frame.
In winter, it receives around 6,000 visitors daily.