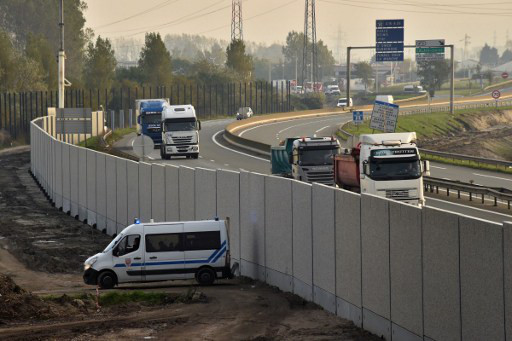 Photo: AFP
The four-metre-high (13-foot) wall runs along a kilometre-long stretch of the main road leading to Calais port, next to the area that used to house the sprawling camp.
The concrete barrier — estimated to cost €2.7 million ($3 million) — aims to prevent new arrivals stowing away on trucks bound for Britain.
Work on the wall, which is covered with plants on the traffic side, began in September. The squalid camp was razed after thousands of migrants were taken to shelters around France in October.
The structure is complete, a spokesman for the local prefecture told AFP late Monday.
The wall was built to boost a network of wire fences that had failed to prevent near nightly attempts by migrants to waylay trucks en route to Europe's second-busiest port.
This year alone, several migrants died after falling off trucks or being run over.
Calais has for years been a staging post for attempts by migrants to sneak into Britain by stowing away on trucks or trains crossing the Channel.
The Jungle camp was first demolished in 2009 only to sprout up again in 2015 when migrants from the Middle East and Africa began pouring into Europe in unprecedented numbers.
Calais Mayor Natacha Bouchart attempted to stop construction of the wall, saying there was no need for it once the camp was cleared.