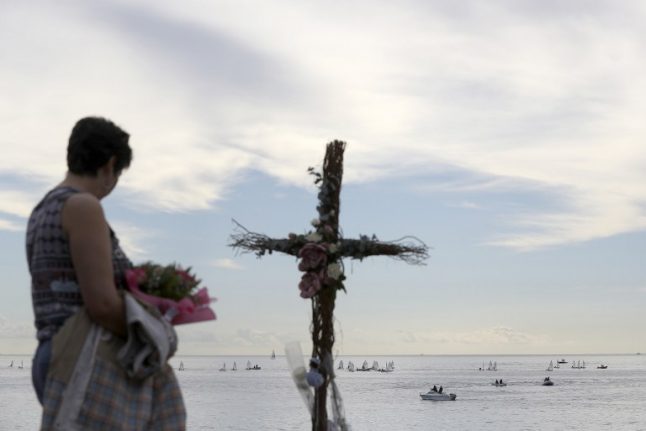 A woman looks at a makeshift cross placed in memory of victims at the Promenades des Anglais in Nice. Photo: AFP

Police held ten suspects in Nice and one in Nantes on suspicion of supplying logistical assistance and arms, a source close to the investigation told BFMTV.

The arrests come five months after Tunisian extremist Mohamed Lahouaiej Bouhlel ploughed a 19-tonne truck into a crowd on the Nice seafront, further traumatising a country reeling from a series of jihadist attacks.
The victims from 19 different countries were watching a fireworks display on the Bastille Day public holiday. Over 400 people were injured.
The 11 people arrested Monday are believed to have been in contact with three people, including two Albanians, arrested on July 6 and charged with supplying Bouhlel with an assault rifle and a pistol.
Bouhlel used the pistol in a firefight with police who shot him dead at the scene, ending his bloody rampage.
“They (the 11) did not necessarily know about the attack but they are part of a criminal milieu involved in arms smuggling,” a source said, adding that the person arrested in Nantes had previously lived in Nice.
Under France's anti-terror laws, they can be held for four days before being brought before a magistrate to face charges or being released.
Six people have been charged so far over alleged links to the 31-year-old killer but investigators have yet to prove that any of them knew what he was planning.
The Islamic State group moved quickly after the attack to claim Bouhlel as one of its followers.
Investigators said he suffered from depression and appeared to have become radicalised very quickly.
The massacre on the palm-fringed Promenade des Anglais was the latest in a series of jihadist attacks that have rocked France over the past two years.
The violence began with the January 2015 attacks on a satirical newspaper and a Jewish supermarket in Paris and continued 10 months later with coordinated strikes on the capital's Bataclan concert hall, national stadium and cafe terraces.
The attacks have hardened attitudes on security and immigration, fuelling the rise of the far-right ahead of next year's presidential election.