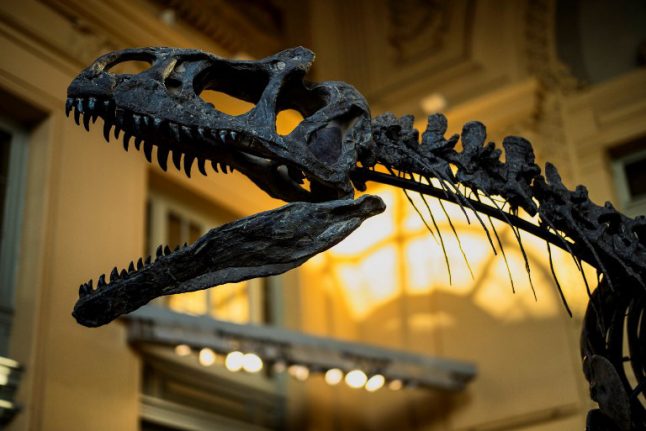 Photo: AFP
The Allosaurus, a ferocious carnivore named Kan whose species went extinct some 135 million years ago, fetched €1.1 million ($1.2 million), Aguttes said.
Discovered in 2013 in the Jurassic Era Morrison Formation in the western United States, the specimen is more than 7.5 metres (25 feet) long and 2.5 metres tall.
The unnamed buyer is French and the skeleton will remain in France and go on public display, an Aguttes spokesman said, without revealing when or where the unveiling would take place. The buyer, who made the purchase by telephone, “wants to keep the location a surprise”, the spokesman said.
The skeleton is three-quarters complete and shows Kan in a running position with its mouth open.
The auction house described the beast as “the archetype of the great predators of the Jurassic Era”.
The sale fell short of the 1.3 million euros fetched by a dinosaur skeleton in October 2010 at Sotheby's in Paris.

Bruno Lebié was digging his garden when he found the bone, which comes from the foot of an ornithopod dinosaur – a two-legged herbivore.

Lebié told the local paper Ouest-France: “The bone could have stayed in there, it really wasn’t bothering me. But I said to myself, ‘could that be a dinosaur bone?’ It’s not really my niche.”

Lebié’s neighbour, who was just the other side of the fence when he found the bone, showed it to an archaeological friend who confirmed it was indeed a rare find.

It wasn’t until the head of the Green Museum in Le Mans, Nicolas Morel, sent a photo to palaeontologist Eric Buffetaut, that the 10cm-long bone was fully identified.

But the bone was an isolated find –the rest of the skeleton is not in Lebié’s garden.

This is one of five other dinosaur bones found in the area in the past 200 years.