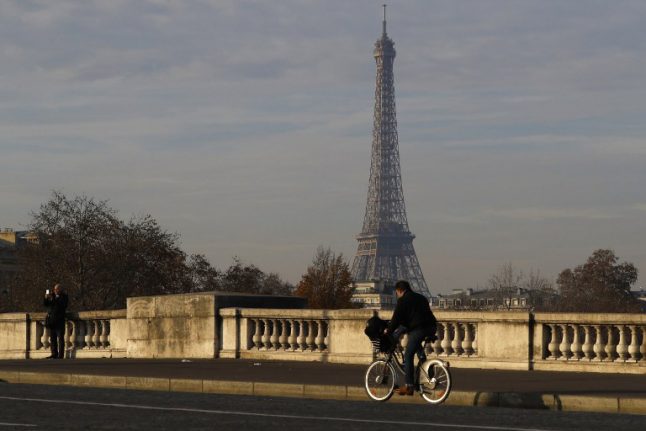 Photo: AFP
Even without the current spike, urgent action was needed to bring down pollution-related deaths, the specialists warned.
Traffic reduction measures to cope with the current winter smog spread from Paris to other cities in France on Friday, but conditions are expected to improve in the French capital this weekend.
“We estimate that fine-particle pollution causes 48,000 premature deaths a year in France, or nine percent of deaths overall,” said Sylvia Medina, a doctor at Public Health France, a state health agency.
If French towns and cities brought pollution levels down to norms recommended by the World Health Organisation, deaths could be cut by more than 17,000, added Medina.
The elderly and young are particularly vulnerable. Fine-particle pollution also affects pregnant women, as toxins can pass through the placenta and cause premature births or underweight babies.
A 2015 Senate report put the cost of pollution in France at more than 100 billion euros ($106 billion) a year. The current surge in smog, trapped by cold weather and windless conditions, is the most serious in Paris in at least a decade, according to Airparif, which monitors pollution in the capital.
“The wind should rise (this weekend) and disperse part of the pollution,” spokeswoman Amelie Fritz from the Airparif monitoring agency told AFP.
In the southeast Rhone Valley region, Lyon and neighbouring Villeurbanne followed Paris on Friday in banning half the vehicles from the roads to try to clear the air.
Car restrictions have been in place in Paris since Tuesday.
The alert was triggered last week when levels passed PM10 readings of more than 80 microgrammes per cubic metre of air particle, with the highest reading, on December 1, at 146.
While high by local standards, that is a fraction of levels in New Delhi, the world's most polluted capital, where PM10 was more than 700 in some areas on Friday.
Paris city officials on Thursday launched a fresh campaign to reduce car use in Paris and increase pedestrian and other non-polluting forms of transport, which is backed by lung specialists.
Mayor Anne Hidalgo said vehicles accounted for 55 percent of pollution in the capital.
Some opposition politicians have criticised Hidalgo, however, saying recent road closures created more traffic jams and more emissions.
Despite the threat of on-the-spot fines, plenty of motorists in Paris were still flouting a ban on cars with a number plate ending in an even number. On Thursday it was the turn of cars with an odd number to stay at home.
“It's annoying,” said Stephane Toni, a 38-year-old stockbroker, as he parked his bicycle in central Paris, referring to people ignoring the new rules. “People don't care.”
Even if he could not feel the effects of the pollution himself, he could see it, he added. “Cyclists should really put on a mask,” he added.