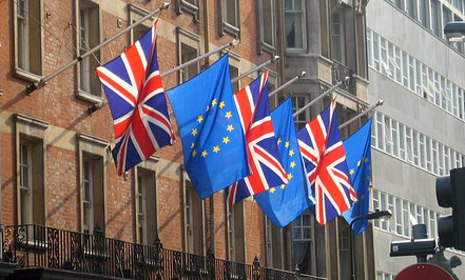 There was potentially some good news on Friday for all those Brits who were unhappy about the EU referendum result.

The Independent newspaper claimed on Friday that Guy Verhofstadt, the man put in charge of Brexit negotiations by the European parliament, will fast-track a proposal that would allow Brits to opt-in and maintain their EU citizenship.

It had already been revealed that the EU was considering a plan to allow Brits to stay as EU citizens but Verhofstadt has now “fast-tracked the idea to the negotiating table”, the Independent writes.

Verhofstadt described the proposal as “very important” and that it had “captured the imagination and hopes” of many British people who wished to retain their rights as EU citizens.

According to the Independent the chief negotiator told the European Parliament's committee on constitutional affairs: “It is an important amendment that has captured the imagination and hopes of many of the 48 per cent of Brits that have voted to remain in the EU. You will all have received many emails about this – and there has been many articles about this.

“It has therefore become a very important issue that cannot await treaty change – as envisaged by MP Charles Goerens when he first tabled it.

“I am therefore proposing to remove it from my report – which after all is concerned with Treaty change – and to include it in the negotiations we will have with the UK government. I as Brexit negotiator for the Parliament will ensure that it is included in the parliament’s negotiating mandate.”

Under the plan Brits would be offered individual “associate citizenship” which would allow them to hold on to their freedom of movement across the Union and therefore live and work wherever in the EU they choose.

They would also be allowed to vote in European elections.

That could potentially save Brits in France the hassle of either having to apply for a long term residency permit – a carte de sejour or trying to get French citizenship, both of which many British nationals in France have been making efforts to get since the June referendum.

READ ALSO: How to get permanent residency in France