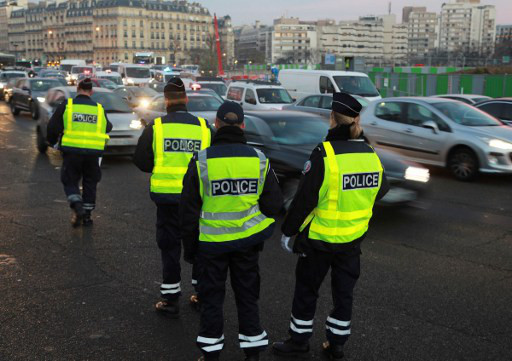 The pollution in Paris right now is the worst it has been in a decade, and public transport has been free since Tuesday.
The pollution level will still be high on Thursday, with authorities announcing that there will be a third consecutive day of travel restrictions. Only vehicles with even-numbered registration plates will be allowed on the road, or the drivers will face fines.
The rule has been in place since Tuesday, alternating between odd and even plates.
This is only the fourth time Paris has resorted to traffic restrictions to cope with air pollution. The region's officials took similar measures in 1997, 2014 and 2015.
But does this system actually work?
The immediate answer would appear to be no, considering the pollution levels actually got worse on Wednesday after a day of supposedly halved traffic.
One major problem is that many motorists apparently ignore the rule. On Tuesday alone, police gave out 1,700 fines for those flouting the rules – and that's only the ones they caught.
It's fair to imagine that many more motorists were out on the roads and simply managed to avoid being ticketed. The second major argument against the system is that the restrictions do nothing to target the most polluting vehicles.
A parliamentary report has questioned the efficacy of the restrictions, and it's likely to find that there are better options on hand.
Luckily, the current system won't be around for long. Paris has taken steps to ease pollution including introducing a obligatory new system of stickers to highlight the most polluting vehicles.
Drives of those vehicles will have to leave them at home during future pollution spikes or face financial penalties. The system will be brought in in January.
The Greens candidate in next year's presidential election, Yannick Jadot, said politicians needed to target the most polluting vehicles and restrict the use of diesel engines.
“We have politicians who tell us they are looking after our health,” Jadot said. “The reality is that when they have to choose between traffic, diesel and our health, unfortunately they don't choose our health.”
Measures are also already in place to phase out diesel engines in buses in the capital.
So why the pollution?
The surge in pollution has been driven by cold weather and near windless conditions that have trapped exhaust fumes, smoke from wood fires and other pollutants, according to the French capital's AirParif air monitoring service.
Although bad by Paris standards, current levels of fine airborne particles, or PM10, are around 60 percent of those in Beijing and a fraction of readings in New Delhi, the world's most polluted capital.
For more than a week now, the PM10 readings have been at dangerously high levels of over 80 microgrammes per cubic metre of air particles, reaching 146
microgrammes/m3 last Thursday.
Other parts of France are also being choked by smog.
Officials in the southeast Rhone valley region said they would introduce measures to restrict car use from Friday to combat the problem in the city of Lyon.
IN PICTURES: Paris cloaked in smog as air pollution rises