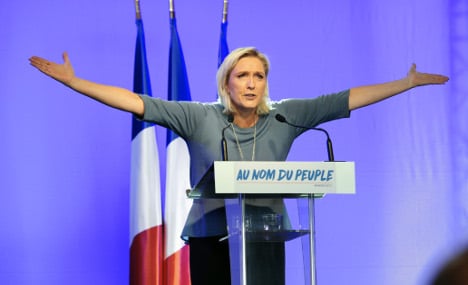 Photo: AFP
“I've got nothing against foreigners but I say to them: if you come to our country, don't expect that you will be taken care of, treated (by the health system) and that your children will be educated for free,” Le Pen said.
“That's finished now, it's the end of playtime,” she told an audience at a conference organised by a polling group in Paris.
Opinion polls suggest the leader of the National Front (FN) will finish second in next year's presidential election but she is hoping for new momentum after Donald Trump's victory in the United States.
Speaking to AFP afterwards, she clarified that she wanted to block education for immigrants who are in France illegally, not all foreigners.
Such a move would contravene current French law which guarantees school places for all children.
She also said that any foreigner using the public education system without paying tax in France would have to contribute.
“We're going to reserve our efforts and our national solidarity for the most humble, the most modest and the most poor among us,” Le Pen told the conference.
The staunchly nationalist FN sees itself as part of a global revolt against immigration, established political parties and globalisation epitomised by Trump's victory last month.
Its leaders regularly criticise the use of France's chronically over-budget social security system for foreigners, arguing that needy French people should be prioritised.
Le Pen falsely claimed on Thursday that anyone aged over 65 could arrive in France and start claiming old-age social security payments.
Polls currently show her qualifying for the second-round of May's election where she is forecast to face — and be defeated by — rightwing Republicans party candidate Francois Fillon.
Few analysts see her as likely to take power, but it has been an unpredictable year in politics and France's sickly economy and immigration are top issues for voters.
The country last ran a federal budget surplus in the 1970s and has a national debt approaching the equivalent of one year's economic output, or 98.4 percent of gross domestic product.
Le Pen wants to withdraw France from the eurozone and has called for a referendum on the country's membership of the European Union.
Illegal and condemned
Trump made controlling illegal immigration a key part of his pitch to American voters, regularly railing against crime committed by foreigners and the country's “open borders.”
Immigration was also crucial in swinging Britain's referendum on the European Union in June when many voters backed the Leave campaign to gain control over their borders.
Le Pen's proposals have echoes of plans reportedly drawn up by the interior ministry in Britain in 2015 when it was headed by Theresa May, who is now prime minister.
Leaked documents revealed by the BBC last week showed that her department had argued for immigration checks in schools and suggested headteachers could withdraw places for the children of illegal immigrants.
French Education Minister Najat Vallaud-Belkacem immediately attacked Le Pen's proposal as shameful and unworkable on Thursday.
“With these words, which I condemn with the greatest force, Madame Le Pen proves… her complete indifference to the terrible human circumstances faced by young children,” she said in a statement.
She underlined that France guaranteed free education for all school-age children on its territory under its national laws and the international conventions it has signed.
“I remind you that it's a matter of honour for the French republic to guarantee to children, to all children, the right to an education — in other words, the right to a future,” she said.
After a string of terror attacks over the last two years and the biggest refugee crisis in Europe since World War II, hardline rhetoric on immigration is seen as a vote-winner on the right.
Fillon has talked tough on newcomers, promising to reduce immigration to a “strict minimum.”
He has also rejected the idea of “multiculturalism”, called Islam a “problem” for France, and insists the country must defend its traditions, language and identity.