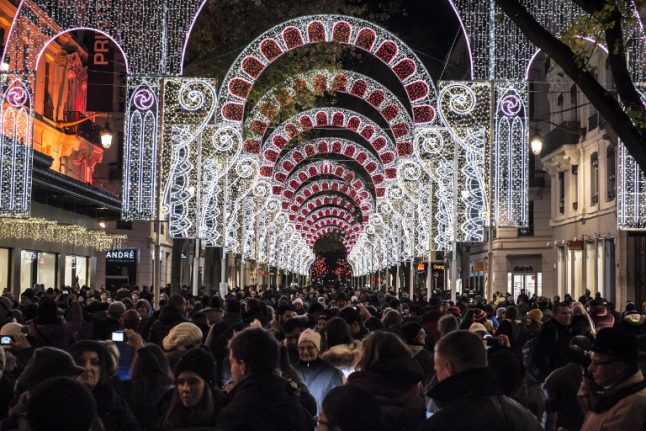 A scene from the last Festival of Lights, in 2014. Photo: AFP
The Festival of Lights is back in Lyon from Thursday night, after the event was cancelled last year due to security fears in the wake of the November terror attacks in Paris.
And regular guests to Lyon's spectacular light and candle show will notice some changes.
For one thing, the festival will only run three days rather than the usual four, and will only be open from 8pm to midnight each night.
The show will be restricted to Lyon's centre, rather than spreading out into the suburbs as in previous years.
And most noticeable of all – the event will be contained in what has been described as akin to a huge fan zone, with 42 guarded entry points that spectators will have to pass through.
In fact, a full 11,000 police and security staff will be on hand to ensure things go off without a hitch.
“All vehicles and bags will be subjected to searches,” local prefect Michel Delpuech told Europe 1, adding that Swat teams will be on hand.
“And the Air Force will allow us to use a drone so we can have real time images of crowd movement. I think that's a first.”
The celebration typically sees many of the main façades of the historic buildings in France’s third-largest city decorated in colourful light shows while the inhabitants line the outside of their windows with candles and tea lights.
The festival was born out of pure coincidence in 1852 when the Lyonnais were set to cap the annual September 8 tribute to Virgin Mary for saving the city from the plague in 1643 by inaugurating a statue of the virgin at the basilica of Fourière.
A flooding of the Saône river, however, forced organisers to push back the date to December 8. On the day of the long-anticipated inauguration a storm raged through the city, prompting the Lyonnais to spontaneously place candles in their windows and light up the city.
Since 1999, it has become a four-day celebration and involves some 80 façade light projects and millions of candles.