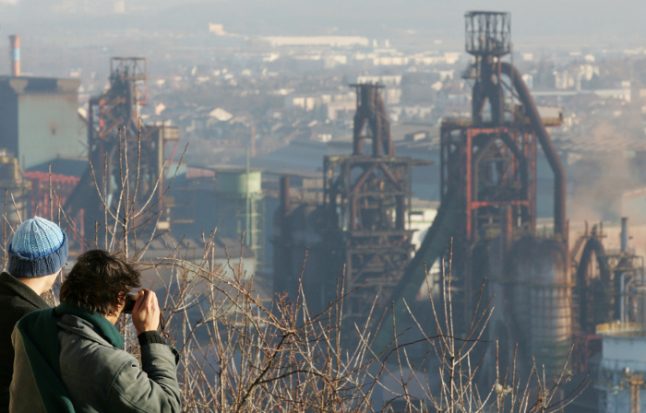 France's rust belt, where voters "will either not vote or vote National Front. Photo: AFP

Towering above the Moselle valley in northeast France are two rusting testaments to the dashed hopes of Francois Hollande's presidency that loom large over the election of his successor next year.

Five years after steel giant ArcelorMittal snuffed out the last two blast furnaces in a crucible of France's heavy industry, the workers who fought to save their beloved “cathedrals”, as they call them, are still seething.

Lakshmi Mittal, the Indian billionaire owner of the sprawling steelworks that runs between the towns of Florange and Hayange, is the target of much of their ire.

But the ruling Socialists are also feeling the heat.

They are accused of betraying voters who elected Hollande on a promise to tame capitalism and keep the Florange fires burning.

“I will never again vote Socialist. Never. It's over,” said Lionel Burriello, a 39-year-old mechanic, who followed his Italian immigrant father into the steel mills.

“It was a shit job, toiling in the heat and the dust. But we took pride in it,” said the trade unionist, one of the 629 workers who were moved to jobs in the site's rolling mills or pensioned off under a 2012 compromise brokered by the government.

For Olivier Weber, another son of the valley who carried out the last smelting operation in October 2011, the loss of the hot steel mills robbed the region of a key marker of its identity.

“Seeing the furnaces is like seeing the graves of relatives in the cemetery. It's painful,” the 35-year-old said. When steel was gold

The deindustrialisation that fuelled Brexit and Donald Trump's rise to the White House has created fertile ground for far-right leader Marine Le Pen, who is hoping to pull off a similar upset in the April-May election on a protectionist platform.

More than 1.5 million manufacturing jobs have been lost in France in the past 25 years, with some of the country's best-known manufacturers like Peugeot and TGV high-speed train maker Alstom among those requiring a leg-up recently from the state.

Situated at the crossroads between France, Belgium, Luxembourg and Germany, the Lorraine region where the Moselle valley is situated has kept afloat thanks to a broad manufacturing mix.

But the signs of decline sparked by the crisis in Europe's steel sector, which claimed a steelworks in Gandrange in 2008, are starting to stack up.

“It's becoming a wasteland here,” said Gabriele Mariotti, the owner of a cafe on the main street of Hayange, a grey town at the foot of the blast furnaces.

“The gold in this valley was steel. Now there's nothing left. They sent it all overseas,” said Fernand, a scrap metal dealer and FN supporter whose son was among hundreds of people laid off from ArcelorMittal subcontractors in the past five years. Hayange made headlines when it dumped its longtime Socialist mayor for a young gun from Le Pen's National Front (FN).

Trade unionist Frederic Weber fears the FN could spring a similar surprise in the presidential election, which polls show ending in a duel between Le Pen and Francois Fillon, a Thatcherite conservative.

“People here are lost,” says Weber. “They tell us they will either not vote at all or vote FN.”

On a visit to Florange in October Hollande defended the five-year commitment he secured from ArcelorMittal in 2012 to preserve jobs and plough 180 million euros ($193 million) into the area in return for the mothballing of the furnaces.

“The battle was won,” Hollande declared — an assessment contested by theworkers, who resent him for overriding former economy minister Arnaud Montebourg's proposal to temporarily nationalize the site.

Last week, Hollande announced he would not stand for re-election, paving the way for his prime minister, Manuel Valls, to throw his hat in the ring.

“Whether it's Hollande or Valls, it's the same thing. It's just a change of packaging,” Weber said.

Local Socialist lawmaker Michel Liebgott accuses “Made in France” champion Montebourg — who is also running for the party's presidential nomination — of perpetuating “a romantic vision of the working class that no longer exists”.

“In today's factories, people are sitting at computers,” Liebgott argues, calling for greater investment in training people to work in high-tech plants.

Burriello, who is running for parliament next year on a hard-left list, said voters drawn to populist candidates faced a choice between two “us-versus-them” programmes.

The opportunities and pitfalls of Europe's open borders are on daily display in Lorraine, where 90,000 skilled workers commute across the border each day to Luxembourg for better wages, while the unskilled eke out a living at home.

It's a politically toxic cocktail for Liebgott, whose 20-year parliamentary career could be in jeopardy if he stands again in the general election in June.

“I'd be happy to make it to the second round,” he says.