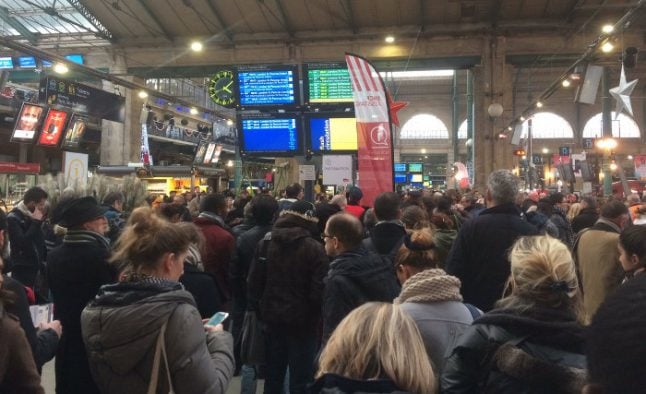 Photo: The Local
Main info:
Travel chaos hit Paris on Wednesday afternoon as main line services, including the Eurostar, RER commuter trains and suburban train services in and out of Gare du Nord were suspended from 1.20pm.
The power outage forced the cancellation of several services and passengers were advised to change travel plans.
By 3.40pm SNCF said power had been restored to all but two lines and services would begin again gradually at Europe's busiest rail station.
A TER local train from Beauvais to Gare du Nord had brought down a power cable as it entered the station, causing the massive power cut, according to reports.

A lot of people and not a lot happening at Gare du Nord right now as train traffic at total standstill. #garedunord pic.twitter.com/Y0NKvTIgVY

Marie de Grivel, a passenger at Gare du Nord trying to get to Amsterdam, said she was initially told by staff that there would be no trains for the rest of the day.
“It's absolute chaos,” she told The Local. “There are people everywhere who were meant to get Eurostar trains or Thalys trains to Brussels and Amsterdam.
“People have been told to change their tickets if they can and there are huge queues to do so. I was told there will be no trains until tomorrow.
“I have never seen this kind of travel chaos before. Normally it's just one line, like the RER B, not all trains.”

SNCF also tweeted to stranded and delayed passengers: “All our team is mobilized to carry out repairs and to get things back to normal.”
Pictures posted on Twitter showed passengers having to walk along the tracks.

Trains are stopped just before Paris Gare Du Nord because of an issue with an overhead power line. We'll update you as soon as possible.

Some services had to be cancelled.

#ES9039 Paris-London and #9040 London-Paris are cancelled. Please change your tickets here https://t.co/L74bP55TfS at the station.

Some of the Eurostar trains were stopped along the tracks.

Stuck on board Eurostar as we approach Paris #garedunord. What's the hold up?

Eurostar passenger Bob Waltrip from California told The Local:  “I'm not happy about this, I'm hoping to get to London some time today. And we haven't heard anything, only a few words from the security guard.”

“We advise you to postpone your trip if possible,” says the announcer. Here's the Eurostar queue. pic.twitter.com/9TiSBYqTaQ

International rail passengers could have done with the information being posted in English.

Not surprising that the non-French speaking passengers are confused. All written information in French only. pic.twitter.com/qHdfzdb9Gn

It's already been a bad couple of days for rail transport in Paris and Gare du Nord has been particularly affected.
No RER B trains have been running between the stations since Tuesday morning after a train brought down overhead power cables.
The RER B line usually carries around 900,000 passengers each day, but these passengers have been told to seek alternative transport. People on the tracks between Gare Du Nord and the Stade de France. Photo: AFP
To make matters worse, half of the cars in Paris have been barred from using the roadways due to a spike in pollution, meaning thousands more people have been trying to use the city's train lines.
The pollution is so bad that the Airparif agency, which measures air quality, said on Wednesday that it was the worst in a decade.

The peak is due to the combination of emissions from vehicles and from domestic wood-fires as well as near windless conditions which means pollutants have not been dispersed, the agency said.

Traffic restrictions have been imposed on the capital since Tuesday morning. 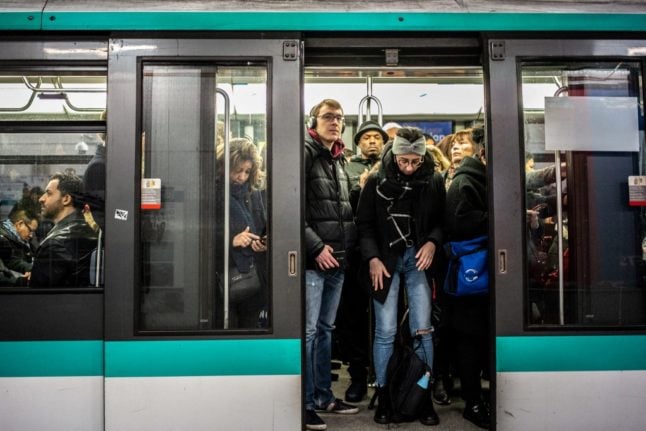 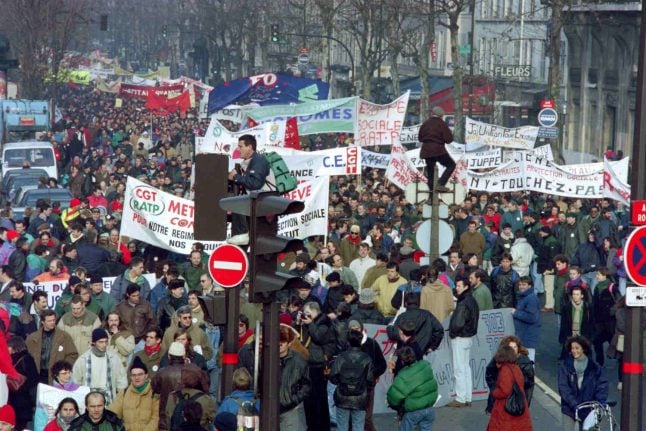