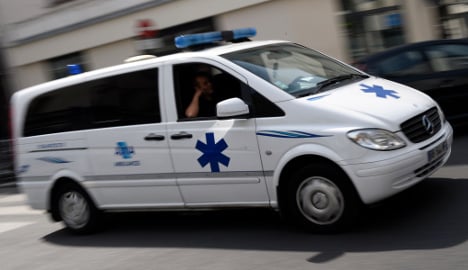 Photo: AFP
It was apparently a joke that went tragically wrong for two friends, aged 28 and 35, in Seine-Saint-Denis, in the northern suburbs of Paris.
The pair were drinking in an apartment with two other friends and the 35-year-old victim last Saturday night.
“The victim, who had drunk more than the others, suddenly fell into a deep and unconscious sleep,” a judicial source told the AFP news agency.
The four friends then stripped the man naked in what they've since claimed was an attempt to stop him from trying to drive home in a drunken state when he awoke, the source said.
They also reportedly drew on his face “for laughs”.
As the night wore on, two of the guests left the apartment, witnesses have said.
It was at this point that the remaining two friends became “annoyed” by the snoring of the sleeping man and took him outside naked.
“They decided to take him outside into the courtyard of the building,” the source said.
The man's lifeless body was found the next day.
A coroner's report has not been made available, but it has been reported that temperatures in the area dipped as low as 3C overnight.
The two men are now facing charges of manslaughter and failing to rescue someone in need.