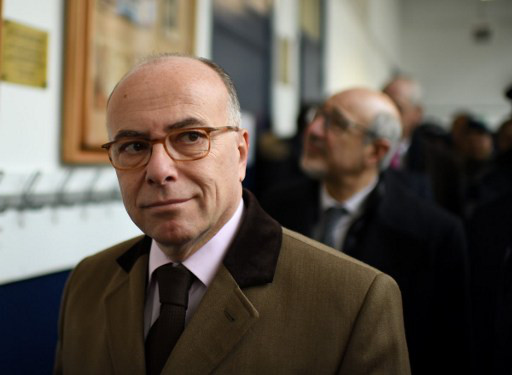 All photos: AFP
Cazeneuve was handed the premiership on Tuesday after Manuel Valls quit to pursue a bid to secure the Socialist nomination for the presidency.
The dapper, bespectacled Cazeneuve, 53, must guide the government through to the presidential election in May.
A close confidante of President Francois Hollande, Cazeneuve has held a series of posts in the Socialist government including budget minister and minister in charge of European affairs.
He was made interior minister in April 2014 when Valls vacated the post to become prime minister.
Nine months later, Cazeneuve was plunged into his first major crisis when jihadist gunmen attacked Charlie Hebdo magazine for its depiction of the Prophet Mohamed, killing cartoonists and police officers. Then in November 2015, Islamic State gunmen and suicide bombers killed 130 people in Paris, slaughtering people on cafe terraces, in restaurants, at a concert hall and outside the national stadium.
Cazeneuve took control of the massive security operation and after Hollande called a state of emergency, the interior minister brushed off protests that rights were being trampled on as hundreds of homes were raided and suspects arrested.
Weathered storm
He also weathered a storm of criticism over the jihadist attack by a Tunisian man who rammed a truck through a crowd of Bastille Day revellers in the city of Nice in July this year, killing 86 people.
The government faced howls of outrage that the security measures that night were insufficient, despite the fact that it was known France was at the highest risk of attack.
With voices on the right and the far-right National Front calling for him to resign, Cazeneuve's response was unyielding: “You do not walk away from the fight against terrorism and for the sake of the Republic, you carry it through to the end.” He showed the same firmness when rivalries between France's different police forces threatened the security operation in the wake of the Paris attacks.
“It's me who decides when it comes to the security of the French people,” he told top officers.
He also received praise for the government's dismantling of the sprawling “Jungle” migrant camp in the Channel port of Calais in October, which passed off without the feared clashes between residents and security forces.
A source close to the president told AFP Cazeneuve had been chosen to steer the government because “he has a good knowledge of the security issues and the fight against terrorism, which are the government's priorities”.
Cazeneuve, who likes to spend his spare time tending his rose garden, hails from northern France and is a former mayor of the port of Cherbourg.