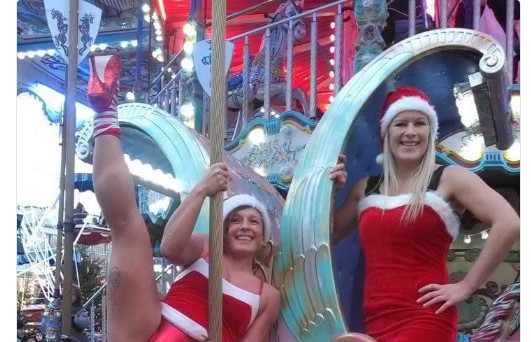 Visitors to the market on Saturday were left stunned by the appearance of two “Mother Christmases” (Mères Noël) dressed in red, skimpy Santa outfits.

As is often the case these days, images of the pair performing their routines on the merry-go-round and on the street lights in the Place de la Liberté were immediately shared on the web, prompting both anger and bemusement.

“Seriously, how do we explain this to the children,” tweeted one bystander. “How did the mayor accept that? Is this the spirit of Christmas?”

Another posted a message on Facebook reading: “Here in Brest it’s getting worse and worse. You go to the Christmas market with your children and you run into this. The men are in heaven but when it comes to the little ones, I do not understand how the Town Hall accepted this.”

Reports however suggest the mayor was an innocent party in the mini-scandal and it appears the two “mother Christmases” pulled off the stunt of their own accord.

According to the local newspaper Ouest-France the two dancers were escorted away from the market by security staff and they may have charged brought against them.