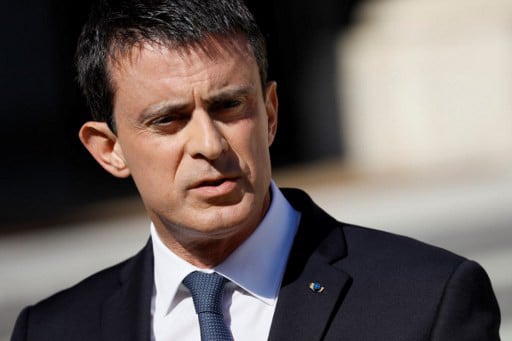 All photos: AFP
All eyes are on the Spanish-born premier after President Francois Hollande announced last week that he would not seek re-election next year and would bow out after a single troubled term in office.
Valls, a former interior minister, has been waiting in the wings for his chance and is expected Monday to confirm he will be a candidate to lead his party in the election next April and May, providing he wins through the leftwing primary in January.
Having stood as a candidate in 2012 when he was defeated by Hollande, Valls will be hoping for second time lucky having helped elbow aside his unpopular boss.
Born to a Spanish painter father and Swiss-Italian mother, the 54-year-old has an unusual family background for a modern French leader and has not been scared to take on the traditions of the left.
Valls makes no apologies for his pro-business stance and desire to modernise the Socialist party — evident in his desire in 2007 to change the name of the party which he judged old-fashioned.
“The left could die,” he has warned, describing the emergence of two “irreconcilable” factions — one pragmatic and open to reforms, the other wedded to the class struggle. Such statements have led to comparisons in the past to ex-British prime minister Tony Blair who dragged his party to the centre ground and won three successive elections.
But his use of decrees to ram through contested economic reforms during his two and half years as PM, and a failed proposal to strip dual-national terrorists of their French citizenship have alienated many in the party.
Valls' tough talk on crime has also opened up divisions on the left, while making him popular with many right-wing voters.
“A boss must know how to be the boss. I'm the boss,” he said in 2014 when Hollande promoted him to the top cabinet job.
In August, he waded into the debate on the Islamic “burkini”, declaring the full-body swimsuit “not compatible” with French values in a sign of his stern line on Islam in France.
“He says things with a certain honesty, a certain clearness, and yes, sometimes a certain roughness,” Alain Bauer, a prominent French criminologist and friend of Valls since their student days, told AFP.

Is this the only socialist who can realistically take on François Fillon and Marine Le Pen after #Hollande quit race?https://t.co/AQhz68wk88 pic.twitter.com/Yai4y79eXV

Focus on suburbs
Valls' family fled Franco's dictatorship to France when he was a teenager and he only gained French citizenship at the age of 20.
Unlike Hollande and many other members of the French political elite, the lifelong Barcelona football fan did not attend the prestigious ENA school of administration, studying history instead.
Valls, who has won praise for his sharp tailoring, has four children from his first marriage to a teacher.
He remarried in 2010, to Anne Gravoin, a glamorous concert violinist.
His political career began as a parliamentary researcher at age 23 before he went on to work as an aide to former Socialist prime ministers Michel Rocard and Lionel Jospin.
In 2001, he became mayor of the tough high-immigration Paris suburb of Evry and was elected to the National Assembly a year later.
His experience in Evry has informed his views of France's notoriously rough suburbs.
He has spoken out about the failure of France to offer opportunities to immigrant families in grim high-rise homes outside major cities, deploring the “spatial, social and ethnic apartheid”.
To triumph, he will need to bridge serious divisions within his own camp and overcome scepticism among the public about his time working for the most unpopular president in 60 years.
Valls is a favourite to win the Socialist-organised primary but polls show him trailing in the first round of the election in April behind conservative candidate Francois Fillon and far-right leader Marine Le Pen.