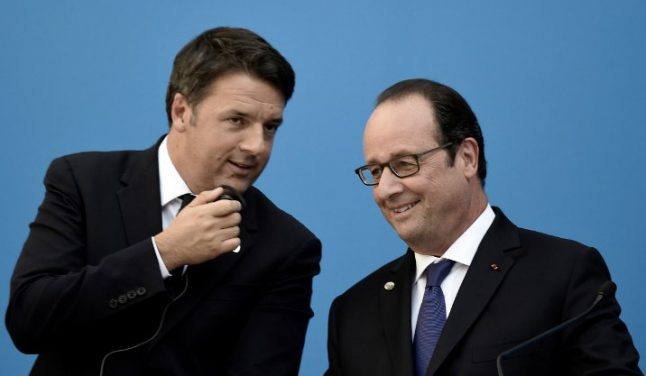 Italian prime minister Matteo Renzi announced that he would resign on Sunday night after exit polls showed a heavy defeat in his referendum on constitutional reforms.

In a statement form the Elysée Palace Hollande “saluted Renzi's dynamism and his qualities to implement courageous reforms for his country.

“The president shares his determination to steer Europe towards growth and jobs and stresses that Matteo Renzi is a committed actor of a strong Franco-Italian relationship.

“The president offers him all his sympathy and hopes Italy can find the means to overcome this situation.”

Earlier Renzi said he would officially hand in his resignation on Monday after the “extraordinarily clear” victory for the No camp. “I wanted to reduce the number of seats,” said Renzi, referring to the reform which would have seen the number of senators cut significantly. “In the end, the seat which is going is mine.”

Polls for national broadcaster Rai and the La7 television channel both gave the No camp as winners by a margin of at least 54 to 46 percent in Sunday's referendum.

One poll, from the IPR Marketing Institute for Rai, put No at between 57 and 61 percent.

The higher percentage came from the first poll based on actual vote count, suggesting that Renzi may be in for an even heavier defeat than predicted in initial exit polls. These had given the No camp a lead of between six and 14 points.

The leader of Italy's far right Northern League, Matteo Salvini, framed the vote as a “victory of the people”.