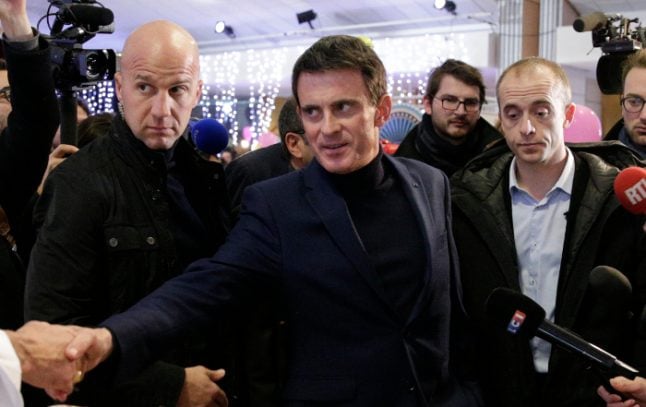 French Prime Minister Manuel Valls on Monday threw his hat in the ring to succeed Francois Hollande in next year's presidential election.

“My candidacy is one of reconciliation,” said Valls, saying he wanted to “bring together” the bitterly divided French left following Hollande's announcement last week that he would not be a candidate.

In a tweet Barcelona-born Valls said he had never ceded to the temptation to quit the much-criticized government of François Hollande, preferring to stick together.

Hollande's decision not to try and beat all the odds and win a second term has changed all that.

“The time has come to go further in my (political) commitment,” Valls said. He announced he would step down as prime minister on Tuesday to contest the Socialist nomination in a January primary.

“I cannot be Prime Minister while being a candidate,” he said. “I want to propose a new path for the French people in full liberty.”

And he made several suggestions to what that path might look like, which were tweeted out by a campaign team ready to lead the battle.

“I don't want that our children have less teachers and our towns and countryside have less police,” read the tweet.

In his announcement on Monday night Valls paid tribute to French President François Hollande, whose decision not to run for a second term has opened a possible path to the Elysée for Valls himself.

Valls talked of his “loyalty” and “affection” towards the statesman “Hollande”.

Valls said his decision to run was also a “revolt” against the notion that the left had no chance of winning the presidential election after Hollande's much criticised presidency.

Valls also turned on his rivals, first of all François Fillon, the rightwing Thatcherite who wants to make sweeping spending cuts, including slashing 500,000 civil servants.

He also sent a message to the far right leader Marine Le Pen criticising “rhetoric that divides us and stigmatises us.”

Earlier in the day his entourage had confirmed that he would put an end to the speculation over whether he would run — seen as highly likely following President Francois Hollande's decision on Thursday not to stand.

The French left, in search of a new leader after Hollande's exit, will hold a US-style primary in January to choose a presidential candidate.

The divided left is in disarray with former economy minister Emmanuel Macron also throwing his hat into the ring as an independent.

However polls shows that while Valls would win that contest, he would finish behind far-right candidate Marine Le Pen and the rightwing candidate Francois Fillon in the first round of the presidential election in April, failing to make the runoff two weeks later.

It is not clear who will replace him as prime minister but Health Minister Marisol Touraine and Interior Minister Bernard Cazeneuve are among those tipped to succeed him as premier for the six months until legislative elections that follow the presidential vote.