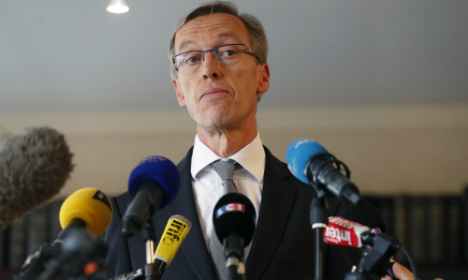 Prosecutor Eric Lallement says the teen is suspected of being part of a group of around 15 youth who attacked officers with Molotov cocktails. Photo: Thomas Samson / AFP file picture

The boy, who was arrested on Thursday, has been charged with “complicity in the attempted murder of persons of public authority,” said Eric Lallement, the prosecutor from Evry, south of Paris.

The unnamed youth is the first to be charged over the October incident that led to angry wildcat protests by police over mounting attacks on officers. Some 80 police officers and their families protested outside Every town hall last month, demanding “more resources and respect” following the attack.

On October 8 four officers were injured when a group of around 15 youths from a housing estate in the Paris suburb of Viry-Chatillon swarmed their cars and threw Molotov cocktails at them.

A 28-year-old male officer suffered very serious burns on his hands and body and is still in hospital, while his 39-year-old female partner was badly burned on the hands and face, police said.

Two other officers who were deployed as backup suffered minor injuries.

A second youth aged 15 was also arrested on Thursday suspected of having participated in making the Molotov cocktails.

Police are trying to identify the other participants in the attack using DNA found on objects at the scene as well as analysing video surveillance footage.