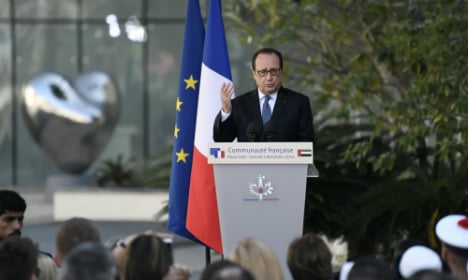 Speaking on his first foreign trip since announcing he would not stand for re-election, the socialist president also hit out at the policies of the conservative candidate who is now favourite to succeed him in May.

“My decisions as president have been based first and foremost on protecting,” Hollande said, adding that he had always sought to look out for the “most vulnerable” and “civilian populations threatened by wars and
terrorism”.

“This will be my task until the month of May.”

Hollande was in the United Arab Emirates capital to attend a conference on protecting the world's cultural heritage against the threats of extremism and conflict.

He also visited the site of the new Louvre Abu Dhabi, which is expected to open in 2017 after much delay.

Faced with record low approval ratings, Hollande announced on Thursday that he would not put his name forward to stand as socialist candidate in next year's presidential election.

Opinion polls suggest that Fillon and far-right candidate Marine Le Pen will win the first round in April and face each other in a runoff the following month.