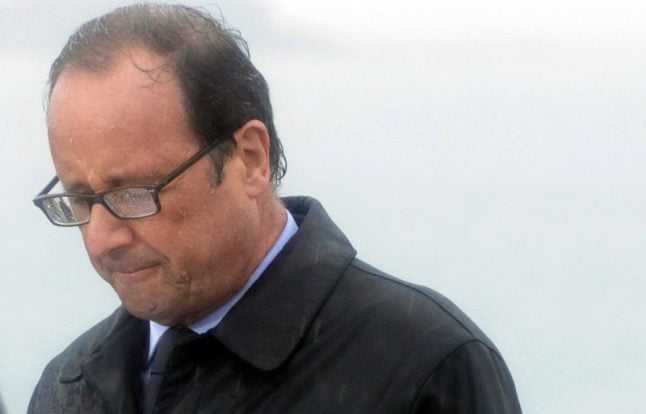 Hollande under the rain as he so often was. Photo: AFP

French President Francois Hollande, who announced Thursday he would not seek re-election, said he wanted to be “Mr Normal” at the start of his time in office — but his four and a half years at the helm have been anything but.

Undermined by persistently high unemployment, a series of jihadist attacks that killed more than 230 people and a string of revelations about his private life, the Socialist's poll scores made painful reading.

Hollande is by many measures France's most unpopular post-war president — yet until Thursday many critics feared he genuinely believed he could still unite the left that has fractured in front of his eyes in recent months.

The 62-year-old had appeared to be tentatively building up to a re-election bid, inviting widespread derision earlier this year when he insisted in a question-and-answer session that things in France were “getting better”.

He maintained he would be judged on his record on cutting unemployment — it was his “main commitment”, he said in his TV address on Thursday, before decisively ruling out running again. The latest figures show that the number of jobless in France has decreased by 100,000 this year — only a small dent in the 3.48 million still out of work in mainland France, but it could have been enough to justify a bid.

Instead, Hollande looked the evidence in the face — and the man nicknamed Flamby after a brand of wobbly pudding concluded that he could not win next year.

He will leave office with the unenviable record of being the first president of France's fifth republic, founded 58 years ago, to decide not to run for a second term. It speaks volumes that one of the defining images of his troubled presidency will be the head of state hunched on a scooter on the streets of Paris in January 2014 on his way to a tryst with actress Julie Gayet.

Two weeks after a celebrity magazine published pictures of him and Gayet together, Hollande announced he was ending his relationship with long-term girlfriend Valerie Trierweiler, a journalist.

The spurned Trierweiler settled her scores five months later in a book titled “Thank You for This Moment”, damaging his reputation with claims that he made crass comments including calling the poor “toothless”. But perhaps the final nail in the coffin was hammered in by Hollande himself.

In a book written by two journalists from Le Monde newspaper published in October, he let loose about senior lawyers and judges, describing the justice system as “a cowardly institution” and France's national football team as badly brought-up boys from the suburbs who earned too much money.

He apologised to the judges for the comments in the book “A President Shouldn't Say That”, but many observers doubted his judgement.

Emmanuel Macron, Hollande's economy minister, also turned on his former mentor by announcing his own bid for the presidency as an independent candidate.

Hollande came to office in 2012, after then IMF chief Dominique Strauss-Kahn's legal difficulties over alleged sexual assault in a New York hotel room torpedoed the political ambitions of the man widely expected to become the Socialist candidate.

The more understated Hollande dislodged Nicolas Sarkozy as president, promising he would be a “normal” head of state in a country weary of his predecessor's brazen, hyperactive style. The new president had formidable political nous acquired in a long career and an earlier relationship with the mother of his four children, the one-time Socialist presidential candidate Segolene Royal.

He also had an easy touch with the public, but Hollande quickly acquired a reputation for being soft, vague and, in the words of his own son, sometimes “elusive”.

On economics, Hollande started with a leftist programme that included a wealth super-tax of 75 percent on top-earners but he shifted course mid-way through his term to embrace pro-business reforms.

Earlier this year, France was seriously disrupted by a late attempt by Hollande to reform the labour market which divided his party.

Yet in November 2015, Hollande appeared to rise to the occasion, guiding a grieving nation after jihadist gunmen and suicide bombers killed 130 people in Paris.

He said France was “at war” with the Islamic State group, and dispatched the aircraft carrier Charles De Gaulle to the Gulf to intensify international air strikes on the extremists.

Hollande brought in a state of emergency and strengthened the state's powers to fight extremists.

But he seriously misjudged parliament by trying to force through a measure that would have stripped bi-national terrorists of French nationality in certain cases.

He said Thursday the attempt to bring in that measure was his “only regret”.

Hollande did point though with pride to his efforts to legalise gay marriage and his government's stewarding of talks in Paris that led to a new global climate change pact last year.