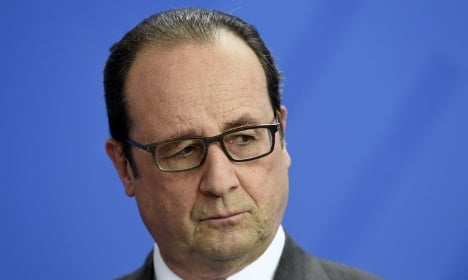 Hollande talked for several minutes to defend his record as president before declaring that he will not be running for re-election.

“I have decided that I will not be a candidate,” the 62-year-old Socialist said in a solemn TV address to the nation.

“In the months to come, my only duty will be to continue to lead my country,” said Hollande who becomes the first post-war French president not to seek re-election.

In his TV appearance Hollande, whose approval ratings make had slumped to four percent, spoke about how he had placed France in the front line for the fight against climate change, how he fixed France's social security debt, financed schools, improved equality, boosted the fight against discrimination, and modernized France's democracy.

He spoke about the risks he had taken to lower unemployment, by lowering payroll taxes for businesses – an unpopular move with the left – in a bid to boost recruitment.

But he accepted that although unemployment had started to fall, it was not enough.

“The results are coming,” he said.

Unfortunately for Hollande he had always said he would only run again if he managed to lower unemployment.

The president also accepted he had made mistakes, in particular he admitted to his regret at trying to force a change in the constitution to strip convicted terrorists of their French nationality.

Although the policy, supported by the far right, may have been popular with the public after a string of terror attacks, most legal specialists said it was futile.

Hollande's announcement came four days after former Prime Minister won the rightwing primary against Alain Juppé. Fillon, a fan of Margaret Thatcher, is the strong favourite to be win the second round of the election against the National Front's Marine Le Pen.

But in the end he said he would not run against Fillon or the far right's Marine Le Pen, knowing he had no real chance of victory. His decision now opens the way for PM Manuel Valls to throw his hat into the ring. Hollande's popularity had hit rock bottom after a term in office marked by U-turns on major policies, terror attacks, high unemployment and embarrassing revelations about his private life.

A new poll on Wednesday predicted he would win just 7.0 percent of votes in the first round of next year's election in April — strengthening critics in the Socialist party who viewed him as a lame duck.

He had vowed to be the “normal” president as the antidote to his predecessor, Nicolas Sarkozy, dubbed the “bling-bling” president. But France and its sluggish economy and high unemployment needed strong leadership and clear direction.

Hollande was criticised by the right for his 75 percent tax and then by his core supporters on the left for his pro-business reforms, that did not go far enough.

He had declared the world of finance was his enemy and vowed to end austerity, but he was soon forced to make dramatic spending cuts under pressure from Brussels, much to the disappointment of those who had celebrated his victory in 2012.

And his colourful personal life has never been far from the headlines, leading his opponents to claim he has demeaned one of the most powerful political offices in Europe.

In January 2014, celebrity magazine Closer published pictures of him arriving on a scooter at an apartment near his official residence for secret trysts with a French actress, Julie Gayet.

The revelations led to the break-up of Hollande's relationship with partner Valerie Trierweiler, who went on to write an eviscerating book which claimed the president mocked poor people as “the toothless”.

France's divided ruling Socialists began accepting candidates on Thursday for a party primary race ahead of next year's presidential election, forcing Hollande into making his  announcement.

Arnaud Montebourg, a leftist former economy minister, submitted his name on Thursday and has insisted the primary should go ahead to unite the fragmented leftwing around a single candidate.
Cancelling the contest would be a “very serious blow against democracy”, he argued on Wednesday.