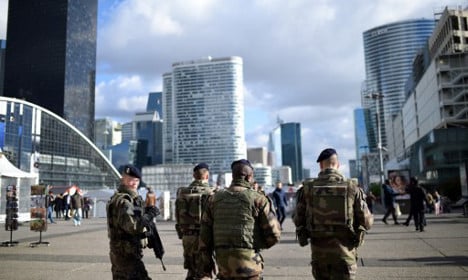 French soldiers in the business district of La Defense, west of Paris. Photo: AFP
Wednesday saw the unveiling of a new look to the national security alert system known as Plan Vigipirate, which now features three levels of warnings.
The system, which was introduced in 1978, originally had just two levels: “vigilance” and “reinforced security/risk of attack” (sécurité renforcée/risque d'attentat), the second of which France is currently under.
The new system features a third and highest level: “Attack Emergency” (Urgence attentat), which is to be used either for an imminent attack or for directly after an attack.
This third level brings safeguards like the closing of roads, Metro lines, or schools at times of extreme danger.
These safeguards, some of which are confidential according to Le Figaro newspaper, were arranged to deal with new kinds of threats like cyber attacks and drone threats.
The new approach is “adapted to the evolution of threats, and complemented the measures that have been taken since our country has been under attack,” the government's defense counsel said in a statement.
It added that the system “intends to better inform everyone about terrorism, the mechanisms used to fight it, and the actions and behaviours that can save and protect us”.
President Francois Hollande called for “continued vigilance of all state services over the next few weeks, especially considering all the gathering and festivities that come with the end of the year”.