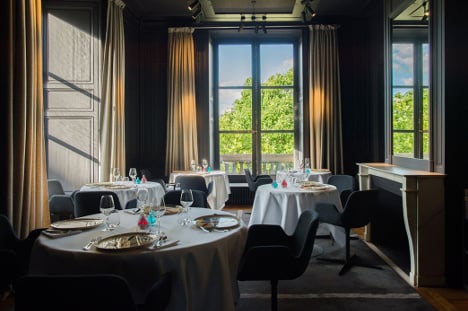 Photo: Guy Savoy
Double Emmy-award-winning US television chef Eric Ripert came joint second for his New York fish restaurant Le Bernardin, sharing the honour with the minuscule Tokyo restaurant, Kyo Aji.
Kyo Aji helped ensure that Japan triumphed again in the country rankings, with 116 of the top-rated 1,000 restaurants, three more than France, with Chinese chefs coming third.
But restaurants in Italy came out best on value for money.
Savoy's restaurant in la Monnaie, the old French national mint on the Left Bank of the River Seine, is famous for its artichoke soup with black truffle and filo pastry mushroom brioche and “cold steamed” blue lobster.
His 18-course “Innovations and Inspirations” menu costs €490 ($520) without wine.
It was the top-rated French restaurant last year coming in fourth place in the La Liste, which was set up as a “more scientific and reliable” rival to the British-based 50 Best Restaurants ranking. Guy Savoy. Photo: AFP
Savoy — who trained the volcanic British chef Gordon Ramsay and remains his mentor — controversially did not make the 50 Best this year.
Nor did Kenichiro Nishi of Kyo Aji, whom La Liste called “the undisputed master of kaiseki”, the traditional multi-course Japanese dinner.
French-born Ripert, 51, a Buddhist who picked up his Emmys for his PBS show “Avec Eric”, already holds the maximum three Michelin stars.
Tragedy
La Liste bills itself as a “guide of the guides”, pulling together reviews from almost 400 guide books, newspapers and online sites from TripAdvisor to the New York Times and the prestigious Michelin rankings.
But tragedy struck the first winner Franco-Swiss chef Benoit Violier, who killed himself a month after winning for the Hotel de Ville at Crissier near Lausanne in Switzerland.
Savoy, 63, a three-Michelin-starred chef, comes from humble origins. His father was a municipal gardener in the small town of Bourgoin-Jailleu near Lyon in eastern France where his mother ran a fast-food “buvette”. A meat dish at Savoy's restaurant. Photo: Guy Savoy
He later trained as a chocolate maker before being taken on as an apprentice by the legendary Troisgros brothers for their restaurant in nearby Roanne.
La Liste's founder Philippe Faure, the head of the French tourist board, has accused the 50 Best of consistently “denigrating” French restaurants in its listing.
While 50 Best has repeatedly denied the charge, no French restaurants have made its top 10 for the last few years.
Faure said his listing was compiled impartially from a rigorous mathematical analysis of hundreds of guides and thousands of reviews.
La Liste has now also launched a smartphone application in six languages aimed at international travellers for its 1,000 top-rated restaurants in the world, plus the 10,000 eateries which its analysis found to be the best value.