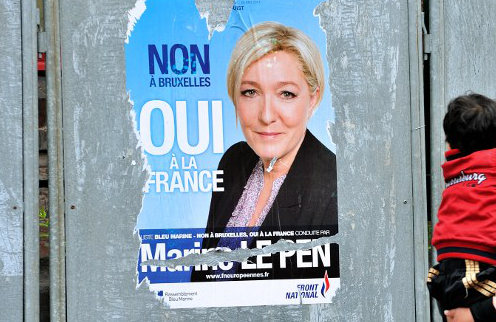 Emilie Fougerolles voted for the far left in 2012 and is “troubled by the racism” of France's far-right National Front, but nevertheless she is seriously thinking of voting for its presidential candidate Marine Le Pen next year.

The 34-year-old sales clerk lives in the Paris dormitory town of Mantes-la-Ville, one of 10 cities the National Front (FN) seized control of during municipal elections in 2014.

Since then, residents are relieved that “nothing has changed in our daily lives,” Fougerolles said in the low-rise town some 50 kilometres (30 miles) west of the French capital.

The string of jihadist attacks that have claimed 238 lives in France since January 2015 have contributed to the shift in the town of around 20,000 inhabitants.

“We live in permanent fear,” said Fougerolles, who was especially shaken by the jihadist murder in June this year of a police officer and his companion in Magnanville, just a few kilometres away.

One of her four daughters was taking a judo class only 200 metres (yards) away from the scene of the attack at the time.

That was when Fougerolles began taking an interest in Le Pen. “She has good ideas when it comes to terrorism,” Fougerolles said. “If her name weren't Le Pen I would have no doubts at all about voting for her.”

The 48-year-old FN leader is the youngest daughter of the fiery and openly xenophobic Jean-Marie Le Pen, who led the party for nearly 40 years.

Since succeeding him in 2011 she has worked to shed the party's racist and anti-Semitic image while hoping to capitalise on economic gloom and concern about Europe's biggest migrant crisis since World War II.

As part of this strategy, she has reportedly instructed FN mayors not to make waves in their cities.

Cyril Nauth, a 35-year-old history and geography teacher and the first FN mayor in the Paris region, failed to see through on his campaign promises to block a new mosque in Mantes-la-Ville, though he has cut subsidies to civic groups.

Le Pen has also seized on the fears generated by the attacks with promises of boosting security and countering perceived Islamic inroads into French society.

The so-called “de-demonising” strategy has translated into votes, and the party won 28 percent in the first round of last year's regional elections, though it was defeated in the run-off when the mainstream parties worked together to block it.

Now, thanks partly to deep disarray on the left, voter surveys predict that Le Pen will come in second or even first in the first round of the presidential vote in April, qualifying her for the May run-off.

She is then tipped to lose, most likely to the newly chosen rightwing candidate Francois Fillon.

But after the shock election of Donald Trump in the United States, no-one is writing off Le Pen's chances.

Franck Party, a 49-year-old supermarket manager, said he would “never” have voted for Jean-Marie Le Pen because he is “too over the top,” but he has voted FN since Marine took over.

“Her positions on defending France's identity resonate with me,” he said, adding that he opposes “mass immigration” and the “dictatorship of Brussels”.

Like Party, many residents of Mantes-la-Ville, which is slightly poorer than the national average, make no bones about voting FN.

“I won't hide it,” said Alain Baudouin, a 56-year-old former carworker who has taken early retirement, slamming “these immigrants who have everything”.

A former mason who gave his name only as Frederic agreed, saying he was sacked “because of Turkish and Polish workers”, adding: “Vive the FN”.

Patricia, a 58-year-old woman who works at Mantes-la-Ville's town hall, said she did not regret voting FN in the 2014 municipal elections, and said she would vote for Le Pen in 2017.

Like Fougerolles, she has seen little change in the city. “Maybe the streets are cleaner?” she said, before adding that for her the main thing is:”We need to revitalise France!”

A woman in her 70s who declined to give her name said she voted for the FN mayor because she was “fed up of state handouts and immigrants.”

But when it comes to the presidency, she said she preferred Fillon. Being mayor is “after all not the same as running a country,” she said.