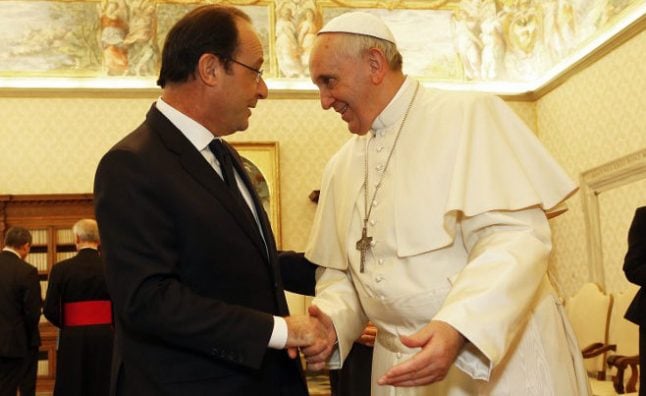 Pope Francis has told a delegation of French politicians that Republican values of “liberty”, “equality” and “brotherhood” (liberté, égalité et fraternité) should not “merely recited in a ritual manor but are deepened and understood in reference to their true foundation, which is transcendent.”

The Pope gave the message to the French during a reception for around 200 elected officials from the Auvergne Rhône-Alpes region of central France, Le Figaro newspaper reported.

The delegation was led by France’s Cardinal Barbarin, the Archbishop of Lyon. Their pilgrimage to Rome ended with a private audience with the Pope on Wednesday.

Pope Francis also stressed the need to “regain the sense of politics” especially in a French society “rich in diversity”. He noted that “fears and frustrations” in France had been intensified by the terror attacks and the “blind violence that has deeply wounded the country”.

The words “liberté, égalité, fraternité” can be seen everywhere in France, from postage stamps to school gates, but some, perhaps the Pope included, have questioned whether the founding motto is just outdated words rather than values that really reflect France in 2016.

Following the recent terror attacks in Paris and Nice the revolutionary motto of “liberté, égalité and fraternité” was repeated over and again by politicians trying to reassert a French identity that was coming under attack from home-grown jihadists.

Since then these French values have been sternly tested in a country that has witnessed record unemployment and rising poverty, particularly in poor immigrant suburbs, an ongoing terror threat, a migrant crisis, the rise of community and religious tensions, huge election turn-out for the divisive far right and a permanent state of emergency fiercely criticized by human rights groups.

Some have suggested French politicians would do better to create a new identity rather than to hark back to an outdated one.

For his part Pope Francis encouraged the French officials to “seek and develop the sense of common good and general interest.”

More specifically the Pope urged the local authority representatives from France “to listen to those in a precarious situation, without forgetting the migrants who have fled  their countries because of war, misery and violence.”

For the Pope the point of politicians is to “contribute to the building of a more just and humane society, a welcoming and fraternal society.”