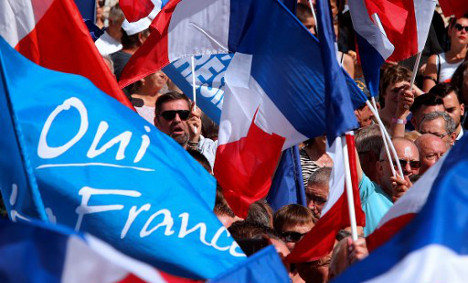 French far-right party National Front's supporters hold French National flags and FN's flags as they listen to their president speak. Photo: AFP
Some 54 percent of the French see globalization as a threat, a study by Germany think tank Bertelsmann Foundation revealed on Wednesday.
The only country in the EU with a higher rate was Austria at 55 percent, with no other country registering above 50 percent.
Just 36 percent of those in the UK saw it as a threat according to the survey, in which just under 15,000 EU citizens in nine major countries were quizzed.
Wednesday's survey linked a fear of globalization with increased support for fringe parties.
“Europe has particularly benefited from globalization. Yet many people feel they have been left behind,” Aart De Geus, chairman of the Bertelsmann Foundation, told the Reuters news agency.
“The established parties need to incorporate this fear of globalization into their work.”
The survey findings will no doubt make pleasant reading for National Front leader Marine Le Pen, who has positioned herself as the champion of anti-globalization and anti-free trade ahead of next year's election in France. Marine Le Pen. Photo: AFP
“Madame Frexit” – as she dubbed herself – has had a bounce in their step ever since the Brexit vote this summer in the UK.
And if her party needed any more proof that populism was proving popular it came in the form of 47.7 percent of the American electorate voting for their own anti-establishment, wildcard candidate in the form of Trump.
Le Pen said his win was “good news for France” and that Trump would tame “wild globalization”.
“Their world is crumbling, ours is being built,” National Front deputy leader Florian Philippot said after the vote.
“Today, the United States, tomorrow France. Bravo America!” cheered Jean-Marie Le Pen, the founder of the the National Front.