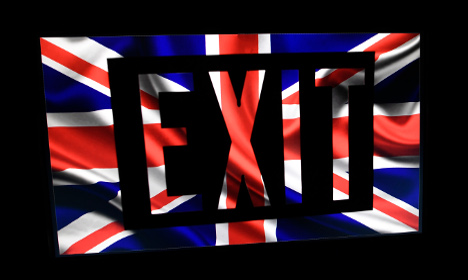 The handwritten notes were carried by an aide to the Conservative vice-chair Mark Field after a meeting at the Department for Exiting the European Union.

But unluckily for the careless aide and the embarrassed UK government they were photographed by an eagle-eyed snapper.

The stand-out note that has made the headlines in the UK was: “What’s the model: Have your cake and eat it,” a phrase famously used by UK foreign secretary Boris Johnson when suggesting Britain could remain a member of the single market without having to accept freedom of movement.

The British government has however denied that the note represents its official position.

“What’s the model? Have your cake and eat it” – Notes expose the omnishambles that is Brexit https://t.co/nhNGv7EmB6 pic.twitter.com/1IgwciTkJZ

However other notes caught on camera made headlines in France, one of which read “French likely to be most difficult”.

This suggests those in the Department for Exiting the European Union are worried that the French will be the biggest obstacle to Britain getting the kind of deal it wants, in other words staying in the single market.

The note suggested any chance of a free trade deal with EU partners will stumble on the services industry because the French were hoping to take advantage of Britain's exit.

Another handwritten comment appeared to make reference to the negotiating team that Britain will face in Brussels. The document read: “Very French. Need fair process guaranteed.”

In August the EU appointed Frenchman Michel Barnier as the man in charge of Brexit negotiations. The appointment was dubbed an “act of war” by the pro-Brexit press in Britain as Barnier is a veteran of tussles with the City of London.

The French government has repeatedly suggested the British can not just pick and choose the best bits about being in the EU when negotiating Brexit.

In October French President Francois Hollande sent one of the strongest warnings yet that Britain will have to pay a heavy price for leaving the European Union.

He called for “firmness” by the EU powers in Brexit negotiations to avoid the risk that other countries might seek to follow Britain's lead and leave the bloc.

The comments added to jitters on financial markets, where the pound suffered its biggest drop since Britain voted in a June referendum to leave the EU.

“Britain has decided on a Brexit, I believe even a hard Brexit. Well, we must go all the way with Britain's will to leave the European Union.