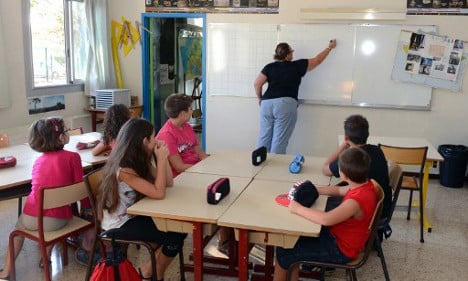 Photo: AFP
A report published on Tuesday has made uncomfortable reading for the French.
The study, carried out by education research group Timss, revealed that French 10-year-olds were bottom of the class in Europe when it comes to maths, and second last to Cyprus in science.
In maths the French students finished the test with an average score of 488, below the EU average of 527 (the international average was weighted at 500 – see full list on the right).
Some 13 percent of these French children didn't reach the score of 400, a fact the Education Minister said showed that “they didn't prove that they have the basic knowledge” on the subject.
“The results are bad, many French students are under performing,” Education Minister Najat Vallaud-Belkacem said in a statement.
“France is quite behind compared to the other countries of the European Union.”
The education minister wasn't about to accept the blame however, instead pointing the finger at former Prime Minister and newly installed rightwing presidential candidate for 2017 François Fillon.
Vellaud-Belkacem criticized the cuts to teacher numbers between 2007 and 2012, when FIllon was in charge and the curriculum he brought in in 2008 that was judged “badly adapted”.
“I hope the Timss study of 2019 and those after show the choices made in this presidency were the right ones,” she said referring to the government's move to restore thousands of teaching posts.
French eight graders (known as CM1 in France) spend 193 hours a year on maths, which is far and away above the 158 hours spent on average by other EU children.
In science, meanwhile, the 5,000 French children who took the test scored 487 compared to the EU average of 525.
They typically spend just 56 hours a year on the subject, compared to a 67-hour average across Europe.
The study is the largest international assessment of maths and science education in the world.
While the report has been carried out six times over the last 20 years, 2015 marked the first time that the French took part, meaning it's impossible to determine any trends in the data.
Topping the maths class in the EU was Northern Ireland, Ireland, and the UK.
Internationally, it was the Asian countries that scored best, with Singapore (618) and Hong Kong (615) leading the way.
Kuwait, South Africa, and Morocco were at the bottom of the list.

Around 600,000 pupils around the world took part in the tests.
“The positive trends indicate education is improving worldwide, and it’s not at the expense of equity between high and low achieving students,” the group said in a statement.
Tuesday's report is the second blow for France's education system this month, after a separate study found the French to be the worst English speakers in the EU.