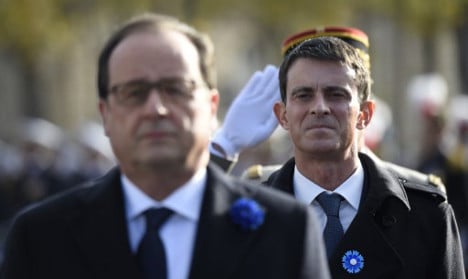 French President Francois Hollande (L) and French Prime Minister Manuel Valls. Photo: AFP
Prime Minister Manuel Valls caused a minor sensation at the weekend by saying he could be a candidate for the Socialist presidential nomination, even if Hollande decided to seek re-election.
His remarks injected further uncertainty into the line-up, five months before an election tipped by pollsters to end in a duel between Francois Fillon, a conservative, and far-right leader Marine Le Pen.
Former prime minister Fillon has emerged as the one to beat after his resounding victory in the run-off of a right-wing primary on Sunday.
The enthusiasm for the Catholic traditionalist has accentuated the unpopularity of the ruling Socialists, who have yet to pick their champion.
As Hollande prepares to announce whether he will seek a second term, Valls denied rumours he was planning to resign to launch a rival bid.
“At a time when France is facing a terror threat there can be no political confrontation over a primary between the president of the Republic and the prime minister,” his office quoted him as telling Hollande over a two-hour lunch on Monday.
“I'm the head of government. I have a sense of duty to the state,” he insisted.
A Harris Interactive poll showed Valls faring no better than the deeply unpopular Hollande if he ran in his stead, with both men languishing on 9 percent in the first round of the election in April.
The poll published Sunday showed Fillon leading Le Pen with 26 percent to her 24 percent in the first round of voting and going on to crush her in the run-off in May.
“One shuttle is taking off, another is self-destructing. Never have the left and right seemed so far apart as on this Sunday, November 27, 2016,” a columnist in Les Echos business daily wrote.
'Globalisation candidate'
Fillon, a self-professed Thatcherite, surged from behind in the last days of the primary on a promise to slash public spending, combat radical Islam and uphold traditional French values.
On Sunday, he promised to be the candidate of “all those who in their hearts are proud to be French.”
His nomination appeared to rattle Le Pen's anti-EU, anti-immigrant National Front, which also campaigns heavily on national identity.
Le Pen on Sunday tore into Fillon's liberal economic programme, which includes cutting half a million public sector jobs.
“No candidate has ever gone so far in bowing to the ultra-liberal demands of the European Union,” she said.
FN vice president Florian Philippot followed up Monday by branding Fillon the candidate of “rampant globalisation”.
Le Pen is hoping to emulate Donald Trump's victory in the US presidential vote by wooing traditional leftist voters disillusioned with high unemployment and factory closures.
Valls on Sunday said he wanted to “dispel the notion that defeat is inevitable” for the Socialists.
Hinting he could challenge Hollande, he told the Journal du Dimanche paper: “I will take my decision with good conscience.”
Valls first broke ranks with Hollande last month after the publication of an explosive tell-all book in which the president took swipes at judges, the national football team and even his own government's policies.
Socialists in spotlight
Analysts say Fillon may have to tone down some of his more draconian proposals and rhetoric on French identity to appeal to a broader base.
As premier under former president Nicolas Sarkozy from 2007 to 2012 he was seen as a moderate but he has hardened his tone after a string of jihadist attacks, rejecting the notion that France is a multicultural country.
The action now shifts to the Socialist camp, which will hold its own primary in January. Two of Hollande's former ministers have already thrown their cap in the ring.
A third, former economy minister Emmanuel Macron, is running as a centrist independent.
Both Macron and firebrand Communist-backed candidate Jean-Luc Melenchon are currently polling higher than Hollande and Valls.
By the AFP's Clare Byrne and Gina Doggett