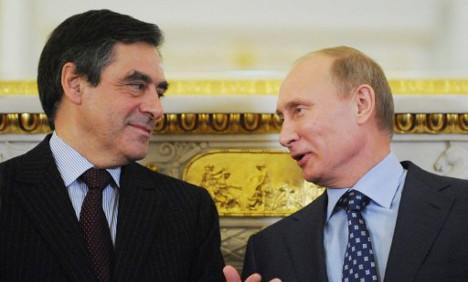 Fillon speaks with Vladimir Putin in 2011. File photo: AFP
Francois Fillon, frontrunner to become France's next president, is known for his pro-Russian stance in international politics.
He wants closer ties with the Kremlin and has called for the European Union to lift its sanctions on Moscow imposed after Russia's invasion of Ukraine in 2014.
“François Fillon is the most pragmatic candidate in international politics,” said the official Russian news agency, Ria-Novosti.
“Fillon lived up to the expectations of the French people,” said Russia's most popular Channel One.
NTV channel said Fillon, 62, who was prime minister from 2007-2012, “was able to gauge the moods of the silent majority” in rural France, “embodying traditional values” in voters' eyes.
“Fillon is closer to the voters than Alain Juppe on several issues: the fight against the Islamic state, gay marriage, and Russia,” Alexei Pushkov, the member of Russian parliament's upper chamber, wrote on Twitter.
Kremlin spokesman Dmitry Peskov gave a neutral comment Monday, saying Moscow respects electoral processes in other countries and prefers not to interfere.
“Of course there are candidates with whom our president had the occasion to communicate more closely in recent years, and there are candidates with whom he spoke more rarely and whom he does not know as well,” Peskov said.
Fillon's term as prime minister overlapped with Putin's and their closeness led to questions about his foreign policy during the campaign, with Juppé calling him Putin's “yes man”.
Germans 'prefer Juppé'
Fillon's closeness to President Vladimir Putin, his call to lift sanctions imposed after Russia annexed Crimea, and the fact that he believes the EU and United States “provoked” Russia by expanding NATO's presence into eastern Europe are all positions that differ from German Chancellor Angela Merkel,
She has kept the phone lines open to Putin but adopted a firm approach against Russia's encroachment in Ukraine.
She is worried by Trump's admiration for Putin, has condemned Russian bombing of Syria's Aleppo as “inhumane and cruel”, and refused to rule out imposing further sanctions on Moscow. Fillon and Merkel. Photo: AFP
“In the diplomatic arena, there may be problems between Fillon and Berlin, with the first issue being policies vis-a-vis Russia,” said Barbara Kunz of the Study Committee on French-German Relations.
Kunz said all this meant that, “even if no one is saying it openly, the Germans prefer Alain Juppé”.
A member of the chancellor's party, speaking on condition of anonymity, agreed on this point, saying that the former prime minister's less hardline profile is a “better Merkel-fit”.
Norbert Roettgen, who heads the German parliament's foreign affairs committee, also said that “there is no doubt that there is a major difference” between Fillon and Germany's position on Russia.
“It's not just about Ukraine, but also about whether Europe can remain a whole, a free continent” or is once again divided between a “free Europe and a zone of Russian influence”, he told AFP.
“Sanctions are precisely the expression of a united rejection of Russia's position, which holds that might is right,” he added.
“We have a fundamental disagreement on the issue of Russia and we need to speak about this with Francois Fillon.”