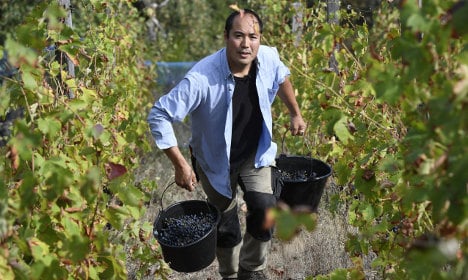 Hirotake Ooka does not do anything by half.

For nearly two decades the former Japanese chemist has been on a quest to make the very best and most natural French wine possible.

But he hasn't made it easy for himself.

His modest vineyards on a hill near Cornas, where the mountains of the Ardeche drop into the Rhone valley, is not so much steep as vertiginous.

Which means not only that his grapes must be picked by hand but that he and his pickers are often forced to perform the backbreaking task on their knees, grape by grape.

With most parcels of land in this dry corner of south central France passed down from father to son, Ooka had to carve his vineyards out of a wooded hillside, before planting his syrah vines in the granite soil.

But it was perhaps destiny that Ooka should land there — his surname means “big hill” and he duly named his estate “Domaine de Grande Colline”.

An old French maxim has it that to make good wine, the vines must struggle.

And just like them, Ooka has suffered in his almost fundamentalist pursuit of “vin nature”, the most organic wine possible.

Yet despite the worst that nature could throw at him — he lost 90 percent of his harvest in 2013 to “black rot” and nearly two-thirds this year to mildew — Ooka has become one of the most respected natural wine makers in France.

“My philosophy is to make a wine just with the grapes, without yeast, sugar or sulphites. In the vineyard as well, I like to do the most natural things possible,” he added, letting the grass grow under his vines and encouraging as much biodiversity as possible. Lashed to a harness

Part of his quiet, maniacal dedication to the precision and authenticity means he crushes his red grapes himself with his bare feet, lashed to a harness in case he drowns in the vat.

“Crushing them with my feet I learn a lot about their aroma, temperature and the speed of fermentation,” he said.

“I wear the harness because it's dangerous with all the carbon dioxide that escapes — it would only take a little for me to pass out and drown.”

Ooka, 42, discovered wine on his first visit to France 20 years ago. “In Tokyo I drank beer, I thought wine was too snobby,” he told AFP.

But his road to Damascus came with the opening of a bottle of claret he bought for his father.

He returned to France and trained to be a winemaker among the great wineries of Bordeaux.

But he soon realised that the wine he wanted to make was not possible amid the monoculture of villages given over totally to wine.

He wanted his vines to benefit from the biodiversity of being next to trees and vegetable patches. 'More extreme than us'

“He is a lot more extreme than us in the way he looks after his wines — he's a real non-interventionist,” said Thierry Allemand, one of the pioneers of the vin naturel or vin nature movement, with whom Ooka also trained.

Some of the other local winemakers “do not understand his way of doing things”, Allemand admitted.

But few dispute the quality of his wine. Allemand described it as “very well made, fresh and long in the mouth”, even if Ooka is still searching for the perfect equilibrium after only five harvests at Cornas.

Half of the 30,000 bottles a year he produces are exported to Japan, although with this year's poor harvest he is having to buy in some of his grapes from his organic neighbours in Saint Peray and Saint Joseph.

Ooka is one of just a handful of Japanese winemakers in France, with the young Kenjiro Kagami also beginning to make a name for himself — also with vin nature — in the Jura region.

But his success has also come at a personal cost. His wife and three children are moving back to live in Japan, although he intends to divide his time between the two countries.

And one day he hopes to found his own domain in Japan.

But until then his commitment to making his wine in France is total. When he first decided to give up chemistry for winemaking, he initially thought about going to California.

“But the Americans learned how to make wine from the French, so I decided to go straight to France, even through I didn't speak French,” he said.

“All the great wines are there and it is beautiful too.”