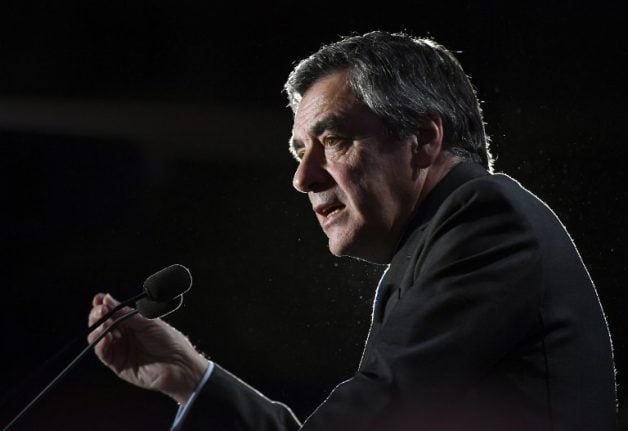 Openly saying you are an admirer of the former Conservative British Prime Minister is normally risky business for a Frenchman.

She and Ronald Reagan are often seen as the bad parents of the neoliberal economic revolution in the 1980s that France has never really adjusted to.

But Fillon, who was Prime Minister under ex-president Nicolas Sarkozy for five years, likes the Iron Lady because according to him she got her country back on track.

“She is the symbol of an inflexible political determination to stop a situation of decline,” said Fillon back in 2014.

And in the run up to the first round of the right wing primaries Fillon hit back at his rivals who compared him to Thatcher in a bid to turn French voters against him.

“Some candidates wanted to be unkind by calling me Thatcherite, but it pleased me,” Fillon said. “At least she left her mark as someone who straightened out her country.”

Franois #Fillon is the only candidate to deeply admire Margaret Thatcher and say it out loud. Quite unusual in France, to say the least.

The word “Thatcher” was trending in France the day after the first round  in a sign the French public were trying to find out just how much Fillon was a fan.

Left leaning newspaper Liberation made it clear on their front cover exactly what Fillon means for France. He loves Thatcher because…

Fillon’s love for all things Thatcher is linked to his desire for a “total rupture” as a means to pull France's struggling economy into the 21st century.

Like Thatcher Fillon wants to cut back state spending, or more to the point completely shred it and impose liberal economic policies.

He says he wants to make €100 billion of savings in five years. To do that he wants to cut 500,000 jobs in the French civil service, raise the retirement age to 65, scrap the 35-hour week for the private sector and raise the legal working week to 39 hours for civil servants.

In terms of the working week, he would simply set a maximum of 48 hours in line with EU law.

Some 20 percent of the €110 billion worth of cuts will be made by local authorities. Fillon also wants to put a lower cap on unemployment benefits.

He’s also a friend of business and wants to cut levies on firms to the tune of €40 billion and implement €10 billion of tax cuts for households. He also wants to scrap France’s wealth tax on the richest residents, called ISF.

To cover for these cuts, he wants to raise VAT by two percentage points.

Fillon also wants to scrap most of France’s labour laws, and leave disputes to be sorted out at sector or company level, to try and break the power of the unions.

In October French right wing magazine Le Point made it clear it too was in favour of a dose of Thatcherism to turn the country around. He has a Welsh wife

Fillon is married to Penelope from Abergavenny Wales. Is France ready for a Welsh first lady? CLICK HERE to find out more about Penelope Fillon. And he reportedly paid her €500,000 as his aide
A French newspaper has alleged on Tuesday that Penelope Fillon was paid half a million euros with funds made available to her husband by the French parliament.
The British-born wife of French presidential candidate Francois Fillon was paid around €500,000 ($538,000) over ten years from parliamentary funds made available to her husband, the report said.
Fillon's a follower of Trump when it comes to Russia

Not many mainstream French politicians have anything in common with Donald Trump but François Fillon does. He too is a fan of Russian leader Vladimir Putin and favours an alliance with Moscow to battle Isis in the Middle East, which the current French administration under François Hollande has avoided, due to Russia’s support for Syrian dictator Bashar al-Assad.

“It’s clear Russia has its own interests in the region, but who in the Middle East doesn’t? Fillon wrote in Marianne magazine recently.

Fillon saluted Putin’s “cold and effective pragmatism” in the region.

For Fillon Islam is 'a big problem'

The former prime minister might not be as obsessed by identity and the role of Islam in France as his former boss Nicolas Sarkozy, but Fillon still has fairly strong views that will not make the country’s Muslim population feel at ease.

“There are no problems with religion in France. There is a problem linked to Islam,” said Fillon.

In his essay “Conquering Islamic Totalitarianism” Fillon says the “bloody invasion of Islamism in our daily lives could provoke a third world war.”

However Fillon is not in favour of banning religious symbols like the Muslim headscarf in public, as Sarkozy suggested he was.

Last year he provoked ire and ridicule dismissed the idea that France should feel guilty about its colonisation of North Africa, saying “there was nothing to be ashamed about France just wanting to share its culture.”

“For Fillon, colonialisation was just like Erasmus,” read one sarcastic reaction on Twittter.

He’s anti-gay marriage and a conservative at heart

Fillon was the preferred candidate of the once influential “Manif Pour Tous” anti-gay marriage movement in France because he closely reflected their views.

Although Fillon says he will not try to overturn the legalisation of gay marriage that was brought in in 2012, he does want a change of the law to prevent gay couples from being able to adopt children.

Fillon is also against surrogacy and medically assisted births for lesbian couples. Feminists have been reminding France that Fillon has said he regrets saying abortion was a “fundamental right of a woman”.

But he does want to boost family allowances and make the payments universal rather than linked to salary as they are now.

He does not believe France is multicultural

Fillon has insisted his vision of France was not as a multicultural country.

When asked whether he saw the future of French society as multicultural he said: “the answer is no”.

“France has a history, a language, a culture, of course this culture and language have been enriched by the contributions of foreign populations, but it remains the foundation of our identity,” he said.

When asked during debates late last year if France was already a multicultural country Fillon said “No, in any case it's not the choice we made, we did not make the choice of communitarianism and multiculturalism.”

“When we go to somebody's house, we don't try to take power,” said Fillon adding that immigrants must respect France's cultural heritage.

Fillon provoked anger and ridicule in equal measure last year when, in a speech to supporters, he said that France should not be guilty of its colonial part in North Africa, because it was all just about “sharing culture”.

He also said he would change the history curriculum so pupils would “not be taught to be ashamed of their country”.

This video sums up the reaction to his comments.

This story has been updated since it was published in November 2016.