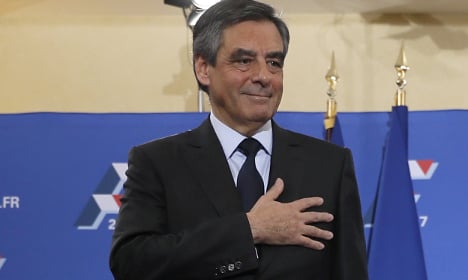 Is he now certain to become the next French president? Nope, not given how unpredictable the race for the Elysée is turning out to be, even in these early stages.

Fillon, who appeared out of the running only two to three weeks ago, is certainly now in poll position (pun intended), according to two separate surveys released shortly after his victory on Sunday night.

Both surveys suggested Fillon would outscore the far-right Marine Le Pen in the first round of the presidential vote, to be held on April 23rd and would easily beat the National Front party leader in the second round runoff vote two weeks later on May 7th.

Indeed the polls suggest Fillon would garner some 67 percent of the vote, compared to 33 percent for Le Pen – in what would be a handsome victory.

Fillon then appears a shoo-in for the presidency.

But in a year when the likes of Donald Trump and the Brexiteers upset the apple cart, Le Pen will still fancy her chances of pulling off what would be another shock victory.

Many suggest Le Pen would have favoured moderate Alain Juppé over hardline, socially conservative, François Fillon, but she will still be able to use her populist, anti-elite, anti-globalisation rhetoric to good effect against the career politician and former Prime Minister Fillon.

According to bookmakers Fillon has a 69 chance of winning the presidency (4/9) from second favourite Le Pen (9/4). He'll take those odds, which are greatly enhanced by the mess over in the Socialist Party.

Speaking of the left, who will be their candidate? It’s all up in the air at the moment.

The left is set to hold its own primary in January to choose a candidate for next year’s presidential election, but everyone is waiting on news of whether François Hollande will run again.

With four-percent approval ratings, and polls suggesting he will be knocked out in the first round, many suggest Hollande should step aside and allow someone else from the Socialist Party to run against Fillon.

That man could be Manuel Valls, who is thought to be reluctant to run in 2017, preferring to save himself, but circumstances may force him to step up.

He is scheduled to have lunch with Hollande on Monday. Party bigwigs have ruled out the scenario of the pair running against each other.

Other candidates on the left include former ministers Arnaud Montebourg and Benoit Hamon, both of whom quit Hollande’s government after the president introduced business-friendly policies. Neither are expected to trouble Fillon.

Far-left firebrand Jean-Luc Melenchon is also running, though is not expected to make it to the second round.

There is also talk of former Justice Minister Christiane Taubira throwing her hat into the ring.

In many ways, Fillon, a social conservative and self-confessed fan of Margaret Thatcher is an ideal candidate for the left, but it appears whoever stands for the Socialists will have trouble making it to the runoff vote.

And what about that young upstart Macron? A victory for centrist Alain Juppé would have left Macron, who does not consider himself left or right, little room for manoeuvre.

But with socially conservative Fillon now leading the fight for the right, Macron, who promises a progressive brand of compassionate liberalism, will try to persuade voters that he is the man to take France into the 21st century as he promised recently.

Immediately after the results Macron appealed to Juppé’s voters and those of France’s main centrist François Bayrou to join him.

However the opinion polls, in such demand at the moment, only predict Macron will gain around 14 percent of the vote in next year’s first round. Not enough to get him past Fillon or Le Pen.