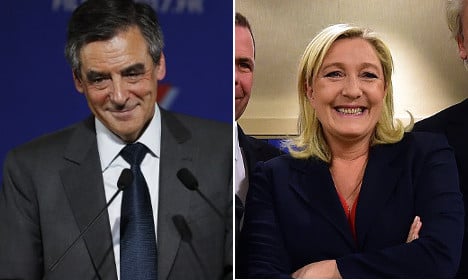 And opinion polls, granted they are not that reliable these days, also suggest that given the lack of an outstanding, unifying candidate on the French left, Le Pen will probably face François Fillon after he beat Alain Juppé in the second round of the rightwing primary on Sunday.

In the post-Trump, post-Brexit world, experts say a Le Pen victory in next year's presidential election is no longer a far-fetched idea.

The question everyone is asking is how will Le Pen do against François Fillon, a surprise winner in the primary given that up until the first round, most polls suggested Alain Juppé or Nicolas Sarkozy would come out on top.

Le Pen’s team have openly admitted that they had not even planned for the scenario of facing Fillon, but they will have to now.

Judging from the noises coming out of the National Front this week it appears they would have rather faced Juppé next May.

“Fillon is the most difficult scenario for Marine. Juppé, who is easy to caricature, would be better,” one National Front official told Le Monde newspaper before Sunday's decisive vote.

Many analysts believe next year's election campaign will revolve around the issues of French identity and security where Le Pen may struggle to differentiate herself from a hardline Fillon.

“No, France is not a multi-cultural country. France has a history, a language and a culture which have naturally been enriched from outside, but it remains the foundation of our identity,” Fillon said on Thursday.

“When we go to somebody's house, we don't try to take power,” said Fillon adding that immigrants must respect France's cultural heritage, in words that could have been said by Le Pen herself.

Just like Le Pen, Fillon promotes a hardline on political or totalitarian Islam in France. On the same theme he has said he is in favour of an outright ban on the “burkini”, the swimwear which caused such an uproar in the summer.

And on the hot-button issue of security, Fillon’s desire to strip jihadists of their French nationality has long been the preferred policy of Le Pen’s party.

Fillon is also socially conservative, reflecting his life as a father of five children and practising Catholic who has been married to his Welsh wife Penelope for more than 30 years. They live in a 12th century manor house near Le Mans.

He voted against gay marriage when it was introduced by Socialist President Francois Hollande and has said he wants to amend the 2013 law.

The former anti-gay marriage movement Manif pour Tous, heavily linked with the Catholic church, which was backed by rightwing groups, is supporting Fillon in his bid for the presidency.

The self-declared “Gaullist” — a form of nationalism that proposes an independent and strong France — has been in politics for around 40 years and like Le Pen also favours maintaining close ties with Vladimir Putin's Russia. But things are rarely simple in French politics and there are others who argue Fillon's radical economic reform plan could actually boost Le Pen's chances of success.

He has promised “to tear the house down and rebuild it.”

Fillon’s economic plan for France includes making savings of €110 billion over five years. That means raising the retirement age to 65, cutting 500,000 civil servant positions, scrapping the 35 hour week and making €40 billion of tax cuts for companies. He also wants to reduce the power of the unions and scrap most of France's labour laws.

Le Pen will be buoyed by the fact Fillon's planned free-market liberal economic reforms are the kind have been credited for the popularity of Donald Trump among disaffected and disadvantaged American working class voters as well as the anti-EU feeling in the UK that drove many poor working class voters to buy into Brexit.

The populist will try to persuade French voters that Fillon will simply lead France, where globalization has also created losers and lost communities, down the same path as Britain and US and it will end in tears.

After Fillon's victory on Sunday Le Pen wasted no time to attack him arguing: “Never has any candidate gone so far in submitting to the ultra-liberal demands of the European Union.”

She argued his conservative positions on society were just a smokescreen.

“Wild globalisation has found its candidate,” he said.

Jean-Yves Camus, a researcher with the think-tank IRIS and an expert on the far right in France, points out that Fillon’s ultra-liberal Thatcherite policies will present Le Pen, who has positioned herself as the champion of anti-globalization and anti-free trade, with plenty of ammunition for her head-to-head battle. In France traditional left-wing voters, who have seen their candidates defeated, are normally prepared to vote tactically in second-round runoff votes in order to keep the National Front from power, but given his ultra-liberal policies the idea of backing Fillon may prove unpalatable to many of them.

“Those on the left would find it hard to vote for Fillon,” Camus tells The Local.

“France is just not used to such harsh economic policies,” Camus tells The Local. “What Margaret Thatcher did in the UK is just not acceptable in this country.

“If Fillon wins on Sunday Le Pen will be able to argue that he wants to inflict the same economic policies on France as Margaret Thatcher did in the UK and Ronald Reagan in the US and how it’s not acceptable.

“She will say it’s an attack on the working classes and the lower middle classes.”

A member of Le Pen’s campaign team told L’Express this week: “Can you really imagine the workers going out to vote for Fillon en masse?”

Against Fillon, Le Pen will also be able to portray herself, just as Trump did against Clinton so effectively, as the alternative anti-establishment figure against a career politician.

The fact Fillon has been around the block and was prime minister for five years under the unpopular Nicolas Sarkozy will allow her to depict him as “same old, same old”.

Fillon could help Le Pen into power in 2022

Nevertheless, despite the unquestionable rise of Marine Le Pen, most analysts and pollsters still believe Fillon would beat her handsomely in the second round runoff vote.

But that may only help her gain power down the line.

“If François Fillon is elected there will be a backlash,” says Camus. “The question would be can the traditional left capitalise on it and attract the disgruntled voters?

“Can the left rebuild and present itself as an alternative or will the anti-free market vote go to the National Front?