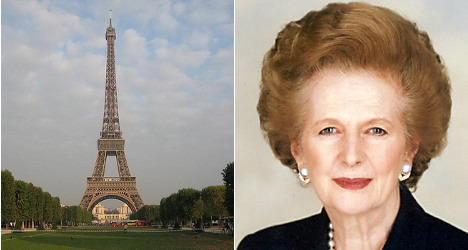 François Fillon, an open fan of the former British Prime Minister Margaret Thatcher and her liberal economic policies is now favourite to become the next president of France.

These opposing views were given to The Local after Margaret Thatcher's death in 2013, but given Fillon's victory they will once again be argued out over the next few months in the run up to next year's presidential election.

So, does France need a dose of Thatcherism?

“France could definitely do with a dose of Thatcherism. The country has maxed out on state spending and has maxed out on debt. It needs a change of thinking to get back to reality and realize that there are market-based economies that are generating wealth. Many people forget that.

“The private sector is currently being crowded out in France because around 58 percent of France’s GDP is swallowed up by state spending in national and regional governments. The public sector is taking up too much responsibility.

“France is in need of the product market competition that Thatcher introduced in the UK. You need to have competitive markets because if you don’t you will have high prices, high costs, less profitability and therefore you will be less competitive. Here you have monopolization all across the board, whether its hotels, banks, supermarkets – you name it.

“In terms of reducing the power of the unions – yes, France could do with doing this too. Although membership is not actually that high here, they do carry a lot of clout. The problem with the labour unions in France is that they protect those in jobs, but there are lots of young people out there who cannot get jobs.

“France has ended up with a two-tier labour system, those with a CDI (permanent contract) and those without one. Those who have one, sit on them and benefit from the protections and those on the outside are stuck there.

“In France all sides need to give something up so these reforms can be implemented without the violence that was seen in Britain under Thatcher.

“Recently in France, you have seen ministers threaten investors with nationalization because they said they intended to close down a factory. It’s not even like the situation with the miners in Britain, which was a case of the state versus the workers.

“France is lagging behind and is ready for a major overhaul.  There will be a time maybe in two to three years and it may not come under this government, but I think it is needed.

“There is a Chinese saying that if you can’t avoid it, just accept it.”

“Since she deregulated the financial sector it has been completely out of control, with bankers doing whatever they want. It led to the crisis in 2008 and to what we see happening in Cyprus right now.

“We need control because banks have no common sense, they do not regulate themselves, which is precisely what this government is trying to do.

“Look at the divide between rich and poor in Britain, which is now greater than before Thatcher. In France we still have a welfare system which brings solidarity and equality to society.

“Unions are weaker in France than they were in Britain at the time of Thatcher but I believe in discussion and finding compromises when it comes to labour disputes. She just broke everything.

“We don't want to see France go that way. We need to preserve the solidarity between the social system and the people.

“Equality is probably the strongest value in the French Republic and she did not stand for that.

“I don't know what we would do if some county invaded some remote islands belonging to France, maybe we would follow her example on that.”

“Here in France we place a higher value on our social services, transport system, support for the unemployed and so on, than in Thatcher's Britain.

“She cared little for that and that's why we could never agree with those policies here. If you travel to Britain you see misery everywhere because of her.

“If you look at the banks and the financial sector then okay, people who work there are better off, but nothing else is. The working class and the public services have been destroyed. All her policies went against poor people.

“In France we don't want that. We resisted the financial crisis better than the UK, exactly because we still had good public services, good transport system and good welfare benefits for the unemployed.

“It's not flexibility of the labour market that advances a country – it brings nothing to the workers. We have excellent workers here in France. As a country France produces more because the people feel good in their work.

“Economic liberalism has no respect for the family or for the people. Closing a factory down and forcing people to work 200km away because the labour market is flexible is not respecting the people.”