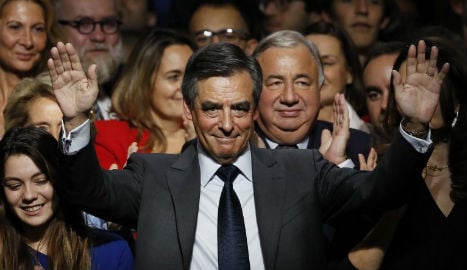 Francois Fillon at the end of a speech during a campaign rally in Paris, on November 25. Photo: Thomas Samson/AFP
Fillon, a 62-year-old former prime minister, is the clear favourite to win the presidential nomination of the Republicans party and its allies over Juppe, a centrist.
At a final rally Friday in Paris, Fillon taunted opponents and commentators taken aback by his late surge from the middle of the field to pole position last week.
His critics, he said, had been shaken up by “a candidate of the right, supported by the people of the right” who had too long been stereotyped as “reactionaries nostalgic for a musty France”.
Millions of people are expected to return to the polls for round two of the primary, which drew over four million voters in the opening round last weekend, and was won by Fillon by over 660,000 votes.
Addressing a flag-waving crowd of thousands Friday, the devout Catholic, who has vowed to partly roll back gay adoption rights, drew applause for his plans to shrink the French state and elicited cheers when he set out his position on national identity and Islam.
Having dismissed multiculturalism and called for patriotism to heal France's divisions, he demanded that “the Islamic religion accept what all the others have accepted in the past… that radicalism and provocation have no
place here”.
Juppe, a 71-year-old political veteran who has also served as premier, has criticised his opponent's economic proposals — particularly his pledge to cut half a million public sector jobs — as too “brutal”.
Juppe says he would cut between 200,000 and 300,000 civil service jobs but vowed to defend France's generous social model.
“I'm confident of victory on Sunday,” he told a crowd in the eastern city of Nancy, despite polls forecasting his demise.
Both men are positioning themselves against their expected rivals in next year's election, notably the far-right leader Marine Le Pen, as well as a Socialist candidate, a Communist-backed candidate and various independents.
Juppe has made a clear pitch for the centre ground, promising a “happy identity” for demoralised France and stressing that the country's strength is its diversity.
“I think I am best placed with my programme to beat Marine Le Pen,” Juppe said on the last day of campaigning Friday, referring to the nationalist and anti-immigration boss of the National Front.
Fillon, who served five years as premier under ex-president Nicolas Sarkozy, has accused Juppe of lacking reformist zeal.
Fillon came from behind in the first round of the primary, winning 44 percent of the vote, and he gave an assured performance in a final televised debate with Juppe on Thursday night.
Both candidates want to scrap the 35-hour working week in a bid to kick-start the sluggish economy but Juppe says he would take a more gradual approach.
While failing to land a knockout blow on his opponent, he hit home with a jibe at Fillon's closeness to Russian President Vladimir Putin.
“This must be the first presidential election in which the Russian president chooses his candidate,” Juppe said, referring to praise by Putin for Fillon.
Fillon believes the European Union and the United States “provoked” Russia by expanding in eastern Europe and has called for an alliance with Russia against the Islamic State in Syria.
Le Pen is currently forecast to come first or second in the first round of the election on April 23 with around 30 percent of the vote, but then fail in the run-off on May 7.
But following the wave of populism that led British voters to choose to leave the European Union and swept Donald Trump to victory in the United States, no-one is completely writing off her chances.
It is unclear who will represent the ruling Socialists in the race. President Francois Hollande will announce in the coming weeks whether he will defy his dire approval ratings and stand for a second term.
An opinion poll Friday showed more than twice as many people would prefer Prime Minister Manuel Valls to be the Socialist candidate over Hollande.