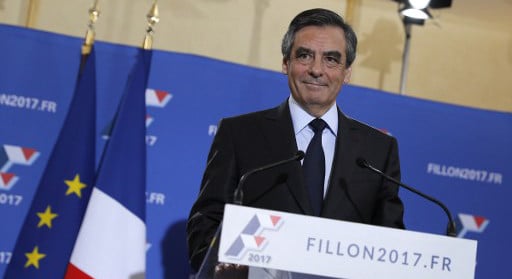 Francois Fillon, a conservative reformist promising to shrink the French state, on Sunday clinched the rightwing nomination to stand in next year’s presidential election with a resounding victory.

Ex-prime minister Fillon will now become a favourite to be France’s next leader after winning the US-style primary to pick the nominee of the Republicans party and its allies.

Fillon, a conservative former prime minister, won around 67 percent of the vote compared to 33 percent for Alain Juppé, albeit with thousands of votes still to count.

TV images showed his supporters celebrating and singing the Marseillaise national anthem. As he took to the stage to give his victory speech his supporters chanted “Fillon president”. He will now be the favourite to win next year’s presidential election.

Fillon said his victory Sunday was a call for action and vowed to unite the right behind his bid to become France’s next leader.

“France wants the truth and France wants action,” he told cheering supporters following the concession speech of rival Alain Juppe, promising to “reach out to all those who want to serve the country.”

“The left means failure, the far-right means bankruptcy,” he declared, saying he would be the candidate of “all those who in their hearts are proud to be French”.

He blasted President François Hollande’s “pathetic” five years in charge of the country, saying “we need to put an end to his presidency and start again”.

Earlier Juppé conceded defeat  and wished his opponent “good luck” in his campaign to become France’s next leader.

Between 4.2 and 4.6 million French voters cast ballots on Sunday to pick the presidential candidate for the centre-right Republicans party.

The US-style primary contest, the first for the party, was a battle between socially conservative and economic “radical” Fillon and the more moderate Alain Juppé, also a former prime minister who is nine years older at 71.

The French presidential vote is seen as a key test for mainstream political parties after the success of Donald Trump in the United States and the Brexit campaign in Britain, both of which harnessed anti-elite, anti-establishment anger.

Fillon will now face fierce competition from far-right National Front leader Marine Le Pen, who is waiting in the wings ready to attack the victor as a symbol of France’s ruling class.

Le Pen wasted no time to attack Fillon’s liberal economic policies which she argues will be devastating for France.

“Never has any candidate gone so far in submitting to the ultra-liberal demands of the European Union,” said Le Pen.

Fillon, a career politician and prime minister from 2007-12, has warned that France is “on the verge of revolt” and believes his plan to slash 500,000 public sector jobs and business regulations is the tonic the demoralised country needs.

“I’ll do everything for entrepreneurs!” he declared at his final rally on Friday night in Paris, promising to help businesses create the jobs needed to lower France’s stubbornly high unemployment rate of around 10 percent.

The devout Catholic and motor racing fan has also won support with his hard line on Muslim immigrants, as well as an emphasis on protecting France’s identity, language and family values.

He demanded Friday that “the Islamic religion accept what all the others have accepted in the past… that radicalism and provocation have no place here.”

Socialist President Francois Hollande has yet to announce whether he will try to defy his historically low approval ratings by running for a second term.

After a troubled five years in power, a survey on Friday showed current Prime Minister Manuel Valls would be a far more popular candidate than Hollande.

Valls has not ruled out challenging his boss in a left-wing primary set for January, telling the weekly Journal du Dimanche he wanted to dispel the idea “that the left has no chance” of retaining power.

Hollande’s former protege and economy minister, 38-year-old Emmanuel Macron, is also set to stand for the presidency as a centrist independent.

Far-left candidate Jean-Luc Melenchon is also likely to draw votes away from mainstream parties in a trend seen in elections across Europe following years of austerity and anger over globalisation and job losses.