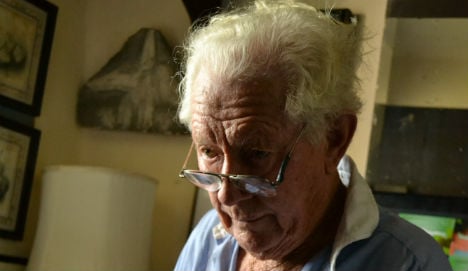 David Hamilton photographed in 2011.
Hamilton, who had recently been accused of rape and sexual assault by several women, was found dead at his Parisian home Friday with a plastic bag on his head, according to another source close to the probe.
The photographer, known for his widely published nude images of underage girls, was found in a state of cardiac arrest an informed source said, adding there was medication near his body. He was declared dead an hour later.
Hamilton, who rose to fame in the 1970s and whose photography books have sold millions of copies, this week threatened to sue his accusers, saying he had previously been cleared of abuse.
The artist, whose work has long raised questions about where art ends and pornography begins, was at the centre of a raft of allegations after a French radio presenter accused him of raping her when she was 13.
Flavie Flament, who modelled for Hamilton almost 30 years ago, published an autobiographical novel last month in which she told of being raped by a famous photographer during a shoot.
Although she did not name Hamilton in “The Consolation”, she used his photograph of her as the book's cover. Flament, 42, later told French media that it was Hamilton who had raped her after three other women contacted her with near identical allegations.
Flament said Hamilton raped her in the shower of his apartment after spotting her in a nudist resort at Cap d'Agde in southwest France where she was on holiday with her parents.
Hamilton confirmed Flament had been his model, but denied the allegations, telling AFP on Tuesday: “I have done nothing improper.”
“Clearly the instigator of this media lynching is looking for her 15 minutes of fame by defaming me in her novel,” he said, adding that he would take legal action.
Flament's editor Karina Hocine told AFP Friday the radio presenter was “devastated” by the news of Hamilton's death.
“Naturally, we feel horrified and, at the same time, really disgusted that there was not enough time for justice to run its course,” she added. “The horror of this news will never erase the sleepless nights,” Flament
told AFP, reiterating her allegations.
Hamilton has said that his work looks for the “candour of a lost paradise”, and is most famous for his kitschy calendars of young girls and his soft-focus erotic films including “Bilitis” from 1977.
He was born in London in 1933 and studied architecture as a young man, but it was in Paris where he first started to work in fashion, having moved there aged 20 inspired by the impressionist painters.
He first worked as a designer at Elle magazine and then as an artistic director at the luxury Le Printemps department store. With no formal training in photography, he found his calling aged 33, seeking his models in the streets and on the beaches.
He became known for his trademark “Hamilton blur”, his photos often bathed in a very distinctive artistic vagueness.
His photos' subdued light, bluish tint and young girls, often blonde, blue-eyed and crowned with flowers, were fashionable in the 70s and 80s but the style became seen as passé in later decades, and his pictures were
considered disturbing by some.
Under the French statute of limitations, charges must be brought within 20 years for rape and 10 years for sexual abuse.
However, in a twist Tuesday, the French minister for children's and women's rights asked Flament to head a body which will look at whether to extend the statute of limitations.
Url copied to clipboard!