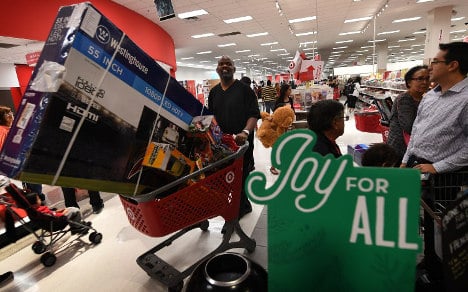 “Black Friday – what’s that?” (Black Friday – c’est quoi?) was the headline on one major French news site on Friday, a sign that the shopping spectacle was still not quite understood in France.

There’s no doubt the phenomenon – which sees stores offer massive discounts to shoppers the day after Thanksgiving Thursday – has become a feature on the French consumer calendar since being imported from the US four years ago.

A quick look at the website of any big French retail store like Darty or FNAC reveals that Black Friday or the “Big Weekend” (because it’s more than just one day now) is certainly now an event in France.

One study said the French will spend some €735 million this year, €100 million more than the €632 spent last year, but well below the €1.69 billion that British shoppers will hand over on Friday.

Amazon France boss Frédéric Dubal said: “Last year, one million products were purchased on this day alone, more than twice as much as a normal day on the site.” But while Black Friday has grown in France, the phenomenon is still yet to really take off in a country which sticks rigidly to two set sales periods – the summer and the New Year.

One survey carried out this week revealed only 18.2 percent of French people said they will definitely buy something in the Black Friday sales.

The reality is that many in France are still not quite sure what Black Friday is, perhaps it’s not helped by the fact the name is in English.

One survey by Toluna suggested only 57 percent of French people had heard of Black Friday, well below another cultural event in November – Beaujolais Nouveau day (81.3 percent).

“The brands have been communicating a lot in the past two or three years, but it has not yet been fully imprinted in the minds of the consumer,” said Anne-Marie Schwab, the CEO of French online shopping site Poulpeo.

There are some suggestions it may have suffered given that the name “Black Friday” is also associated with last year’s terror attacks in Paris on Friday November 13th.

As a result many shops have avoided the name and prefer to use “crazy weekend” or “Big weekend”, something which specialists say limit the popularity of the event. French shopping culture – always more subdued than in the more consumerist “Anglo-Saxon” countries – is framed by the two sales periods authorized by the law – summer and January.

Companies are not allowed to make loss-making sales, usually through crazy discounts of up to 90 percent, outside these official sales periods unless in rare cases.

And companies in France are also less likely anyway to offer the kind of crazy discounts that have prompted riots in the US in the past.

“Black Friday is a typical American institution. It’s hard to import it because it is not in the collective memory of the French,” says Rudolph Bonasse, a distribution specialist from CA Com.

“For us, the sales are traditionally after Christmas and Black Friday seems like a totally artificial way to reverse the logic. It has not succeeded,” he said.

For Bonasse, Black Friday could become popular, but it “will take a lot more time” and will need all the big stores to jump on board “to create a massive event like in the United States”.