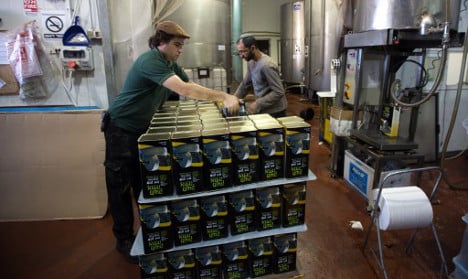 Israeli settlers prepare olive oil containers at the Achia Olive press factory in the Jewish settlement of Shilo in the occupied West Bank. Photo: AFP
France published guidelines late Thursday on enforcing European Union regulations on labelling goods from the West Bank, including annexed east Jerusalem, which the international community considers occupied Palestinian land, as well as the Golan Heights, which Israel seized from Syria in 1967.
It was believed to be the first time that guidelines were issued by an individual member state since the European Union backed labelling of products from Israeli settlements a year ago, a move which sparked a diplomatic crisis with Israel.
“Under international law the Golan Heights and the West Bank, including east Jerusalem, are not part of Israel,” said an advisory published on a French government website.
Labelling goods simply as from the West Bank or Golan Heights without more details is “not acceptable,” it said.
Goods must be stipulated as coming from an “Israeli settlement” when that is the case, to avoid “the risk of misleading the consumer,” it added.
In response, the Israeli foreign ministry said it “regrets that France, which actually has a law against boycotts, is advancing measures that can be interpreted as encouraging radical elements and the movement to boycott Israel.”
It accused France of a “double standard” by focusing on Israel and “ignoring the other 200 territorial disputes around the world.”
In November 2015, the European Union's executive body sparked a major diplomatic row with Israel by adopting a motion that effectively declared that products from settlements would have to be labelled as such across the bloc.
Though the EU insisted the decision was a technical one, Israel suspended some cooperation and a minister called it “disguised anti-Semitism.”
European diplomats privately admit the strength of the Israeli response has made many member states wary of issuing their own specific guidelines.
Hugh Lovatt, Israel coordinator at the European Council on Foreign Relations think tank, said France was the first member state to do so since the EU decision.
Lovatt said France's frustration in recent months at Israel's refusal to attend a Paris-led peace conference and its continued expansion of the settlements could have fed into the move.
He added there had also been concerted action by French civil society and lawmakers.
“The question is whether other member states follow the French example. EU states tend to act like a herd so yesterday's move may lead others to follow suit,” he said.
Paris has been seeking to organise an international peace conference before the end of the year in a bid to kickstart the Israeli-Palestinian peace process, stalled since early 2014.
Israel has refused to take part, saying any peace settlement should be negotiated bilaterally between the two sides.