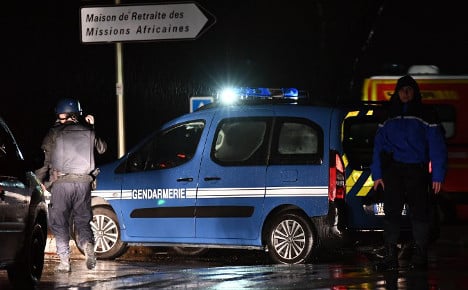 French police were hunting Friday for a killer who burst into a retirement home for Christian missionaries in southern France and stabbed a 54-year-old worker to death, security sources said.

The death set nerves jangling in France late Thursday after a string of jihadist atrocities, but local prosecutor Christophe Barret said police believed it was a “local” crime, not “Islamist terrorism”.

The man, brandishing a sawn-off shotgun and a knife, tied up and stabbed the woman in the village of Montferrier-sur-Lez near the city of Montpellier on Thursday night.

Local prosecutor Christophe Barret told AFP that “there is no particular evidence about the motive” for the killing at the home, where more than 70 mostly former missionaries live.

The attack comes with French security forces on their highest possible alert following a string of attacks by Islamic extremists, including on Christian targets.

A nurse raised the alarm about the attack and when police arrived they found one of her colleagues stabbed to death.

Armed police then searched the building but the killer had fled and was not found despite a huge police search operation overnight, backed by a helicopter.

Residents of the home “are very elderly with an average age of 75 although some are more than 90,” said Alain Berthet, a local councillor in Montferrier-sur-Lez.

Many of the residents require assistance to walk, he said. Concern about further attacks in France rose earlier this week with news of a series of arrests in the cities of Strasbourg and Marseille which the government said had averted more bloodshed.

French public prosecutor Francois Molins will give a press conference later in the day to share more details about the investigation into the seven suspects arrested at the weekend.

One of the men has confessed that an attack was being planned, possibly against police buildings in Paris, according to another security source who asked not to be named because of the sensitive information he was sharing.

Islamist extremists have carried out three large-scale attacks in France since January 2015, when gunmen targeted the Charlie Hebdo satirical magazine and a Jewish supermarket.

And in July, a self-radicalised extremist ploughed a truck into crowds watching Bastille Day fireworks in the southern city of Nice, killing 86.

Two weeks later, two jihadists in their 20s claiming to be IS followers slit the throat of 84-year-old priest Jacques Hamel at a church near the northern city of Rouen.