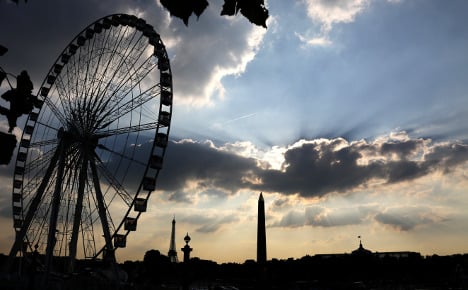 It's been a landmark in Paris each Christmas for sixteen years but now the Big Wheel is under threat of being toppled and fairground workers are not happy.

On Thursday they used trucks to block Place de la Concorde in protest over the state's demand that the famous Ferris wheel lording over the square be taken down.

Demonstrators dressed as Father Christmas also gathered at the square, watched by dozens of riot police.

The 70-metre (230-foot) Big Wheel has been a fixture of the Christmas village on the Champs-Elysees since 2000, drawing around 300,000 visitors a year with its breathtaking views of the city.

It's clearly popular in Paris with one of the official tourist websites waxing lyrical about the wheel and Campion.

“Perched at a height of 70 metres (this is the world’s largest mobile Ferris wheel), you can enjoy a breath-taking view of the Tuileries Gardens, the Louvre and the Christmas lights on the Champs-Elysées,” reads the site Paris Info.

“A symbol of the festive season in Paris, the Big Wheel has been set up every year in this spot by Marcel Campion, known as ‘the king of fairground entertainers’, since the year 2000.”

It made a return this summer around the Euro football tournament but it appears its days are numbered.

So at a time when Paris is desperate to attract tourists after seeing a dramatic fall in visitor numbers, why does the city want to tear down such a popular attraction? He says a high-ranking state official from the body that preserves historical monuments ordered him to take it down.

But there appears more to it than a dispute over the illegal occupation of an historic site.

It appears Paris authorities are no longer comfortable to be working with the king of the fairground.

After years of suspicion Campion, or at least his company “Festivals and Leisure” (Fêtes et Loisirs), is finally under formal investigation for various offences including: olluding with competitors, abuse of property, money laundering, favouritism and involvement in organised crime. In July a legal case was opened into the conditions by which Paris City Hall hands out the contract for the installation of the Big Wheel.

Campion has denied any wrongdoing, saying the City of Paris gave him permission to leave the wheel up until May 2017.

Campion told AFP he was “defending the world of fairgrounds” against what he sees as attempts to have them banished from Paris.

“I'm not a gangster,” he said, pointing out that the Big Wheel “contributes to the city's fame.”

“When justice wants to do her job, she'll have to meet me. I know that people have been attacking me for many years. But I trust the justice system,” he told Le Parisien earlier this year.