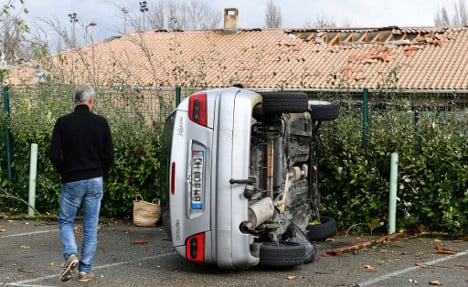 Photo: AFP
The tornado struck overnight in the town of Saint-Martin-de-Londres, near Montpellier in the Hérault department.
Photos and videos from the scene showed upturned cars, structural damage to homes, and uprooted trees. Photo: GoogleMaps
Here are some more images from the wake of the tornado. Hérault remains on orange alert, the second highest of Météo France's warnings. Another six departments have also been issued orange alerts for the ongoing storms.

Meanwhile, the northern half of the island of Corsica is on red alert as violent storms are already lashing the area.

Météo France predicted “very heavy rainfall that could affect human activities and economic life for several days”.
The agency urged residents not to travel, or to walk or drive on any roads that were already submerged in water.

The south eastern regions of France have been hit by storms all week, and they're expected to carry on into at least the very early hours of Friday morning.
Nine departments are on orange alert, with Corsica seeing the only red alert as yet (see map below). Hérault remains on orange alert, the second highest of Météo France's warnings. Another six departments have also been issued orange alerts for the ongoing storms.